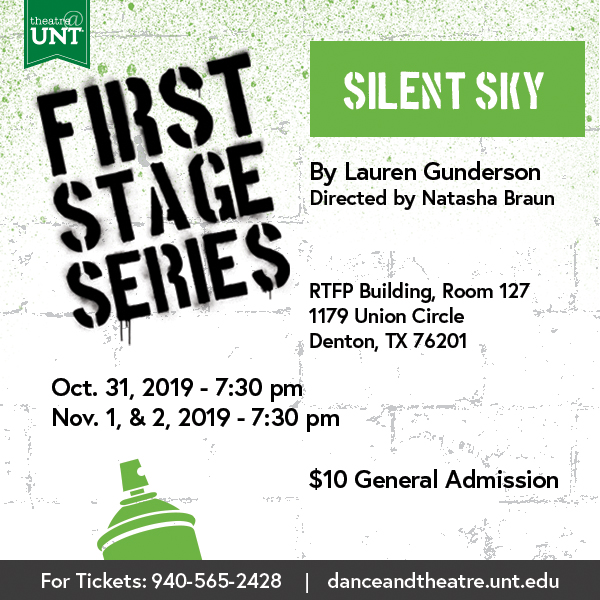 The show listed below is a part of the First Stage Series. The First Stage Series was developed to give students opportunities to explore the craft of play direction while concentrating on the action of the play, and the performances of the actors. To ensure that the student directors are focused on the tasks previously listed, design and technical elements are extremely limited. The show is mounted in one of the Department of Dance and Theatre's classrooms.

When Henrietta Leavitt begins work at the Harvard Observatory in the early 1900s, she isn't allowed to touch a telescope or express an original idea. Instead, she joins a group of women "computers," charting the stars for a renowned astronomer who calculates projects in "girl hours" and has no time for the women's probing theories. As Henrietta, in her free time, attempts to measure the light and distance of stars, she must also take measure of her life on Earth, trying to balance her dedication to science with family obligations and the possibility of love. The true story of 19th-century astronomer Henrietta Leavitt explores a woman's place in society during a time of immense scientific discoveries, when women's ideas were dismissed until men claimed credit for them. Social progress, like scientific progress, can be hard to see when one is trapped among earthly complications; Henrietta Leavitt and her female peers believe in both, and their dedication changed the way we understand both the heavens and Earth. SILENT SKY is presented by special arrangement with DRAMATISTS PLAY SERVICE, INC. New York, NY.

Box Office Hours:
Monday through Friday from 1:00 pm to 5:00 pm
One hour prior to each performance.

Tickets to an individual production may be purchased approximately two weeks before that show opens. Seating availability is often limited, and many shows sell out quickly. Tickets can be ordered with a credit card over the phone by calling (940) 565-2428 or Metro (817) 267-3731 ext. 2428.

The Box Office is located in the RTFP building in the first floor lobby of the University Theatre (room 104). At our box office location, we can accept cash, checks and credit cards.

The box office opens one hour prior to each performance for will-call and to sell any remaining tickets for that performance.

We do not hold unpaid reservations for our performances. All sales are final. There are no refunds or exchanges.