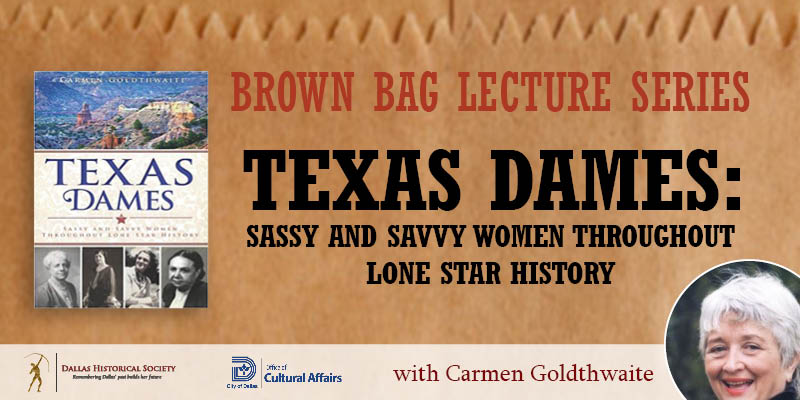 Join the Dallas Historical Society and Carmen Goldthwaite as she discusses the legends she wrote about Texas Dames: Sassy and Savvy Women Throughout Lone Star History. The book recounts how these “Dames” broke gender and racial barriers in every facet of life. Some led the way as heroines while others slid headlong into notoriety, but nearly all exhibited similar strands of courage and determination to wrest a country, a state and a region from the wilds.

From early Tejas to 20th Century Texas, their stories unfold as they notched “firsts” as physicians, mayors (before women got the vote), scientists, bankers, lawyers, preachers and politicians. Texas Dames describes 53 women who wrestled their way into history by their accomplishments, whether in agriculture or banking, opera or circus, Civil War spies and gamblers, educators and aviators.

A 7th generation Texan, Carmen Goldthwaite writes and tells the stories about the Texas she loves for western magazines, community newspapers, and women’s organizations around the state. Goldthwaite’s column, Texas Dames, is published throughout Texas and features stories of the women who’ve pioneered in many roles and along many paths in Texas history.