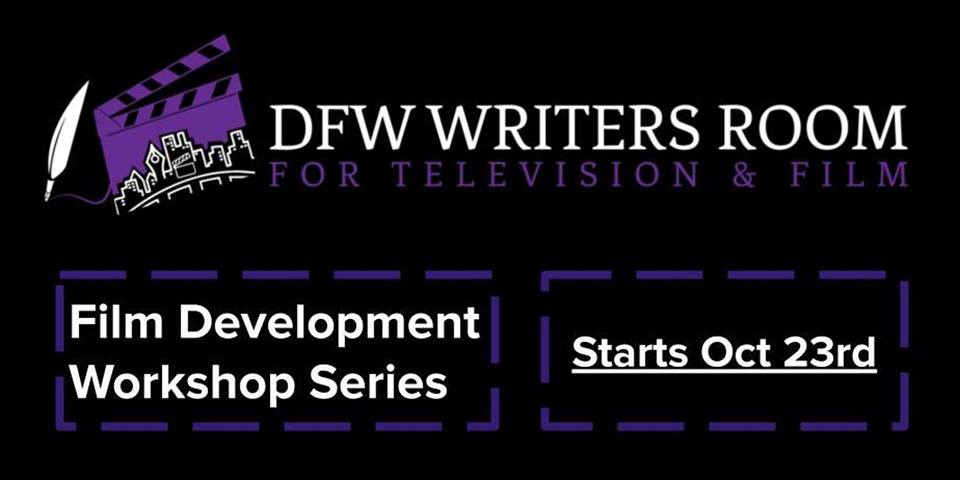 Eight-week workshop for new/emerging writers and filmmakers. Bring an idea, leave with a film. Begins Wednesday, October 23rd.   About this Event:    Beginning Wednesday, October 23rd, Daniel Wells, Creative Director of DFW Writers Room, will take a total of 12 writers/filmmakers through the process of developing a feature film or television pilot.

Attendees will bring a CONCEPT for a FEATURE or PILOT, and after eight weeks leave with a developed project.

Each workshop will begin with a writing prompt and review of the previous session's assignment. Then, after the day’s workshop, the next week’s assignment will be reviewed.

The last week of the workshop will be a wrap and networking party. Additionally, within 90 days of completing the workshop, attendees will be able to schedule one 90-minute 1-on-1 session with Daniel for discussion and development of their current or future project.

Why Host This Workshop?

Too many films with great concepts fail before the project is green-lit. I’m tired of seeing the hundreds and thousands of hours and dollars filmmakers sink into projects, without maximizing the story’s potential in the development phase. Film and Television has entered a second golden age, with the world’s top-grossing media and entertainment companies launching billion-dollar divisions and campaigns to compete within the growing video-on-demand industry.

From Amazon Prime and Netflix to Alphabet, AT&T, and Hulu, and with talk of Apple and Disney entering the market, companies are clamoring for their slice of the video-on-demand pie, currently a $32 billion-dollar segment of the television and film industry.

The stakes for content creators have never been higher. In 2018 alone, over 6,000 members of the Writers Guild of America reported earnings over $1.5 billion dollars. (Approximate average of $250,000/writer)

The time to launch a career as a content creator is now.

This is a series of workshops. By signing up for this series, attendees are committing to attend all scheduled workshops, on time.

Due to the developmental nature of these workshops, all attendees will be required to sign a Non-Disclosure Agreement in-person on October 23rd, 2019. The NDA will cover all projects disclosed and discussed for the duration of the workshop.

DFW Writers Room will not own, retain the rights to, or distribute the work, and owes no obligation to do so.

Even Though Movie Theaters Can Open, Many Won’t

A Pop-Up Drive-In And A Live Cabaret – All In A Richardson Parking Lot.