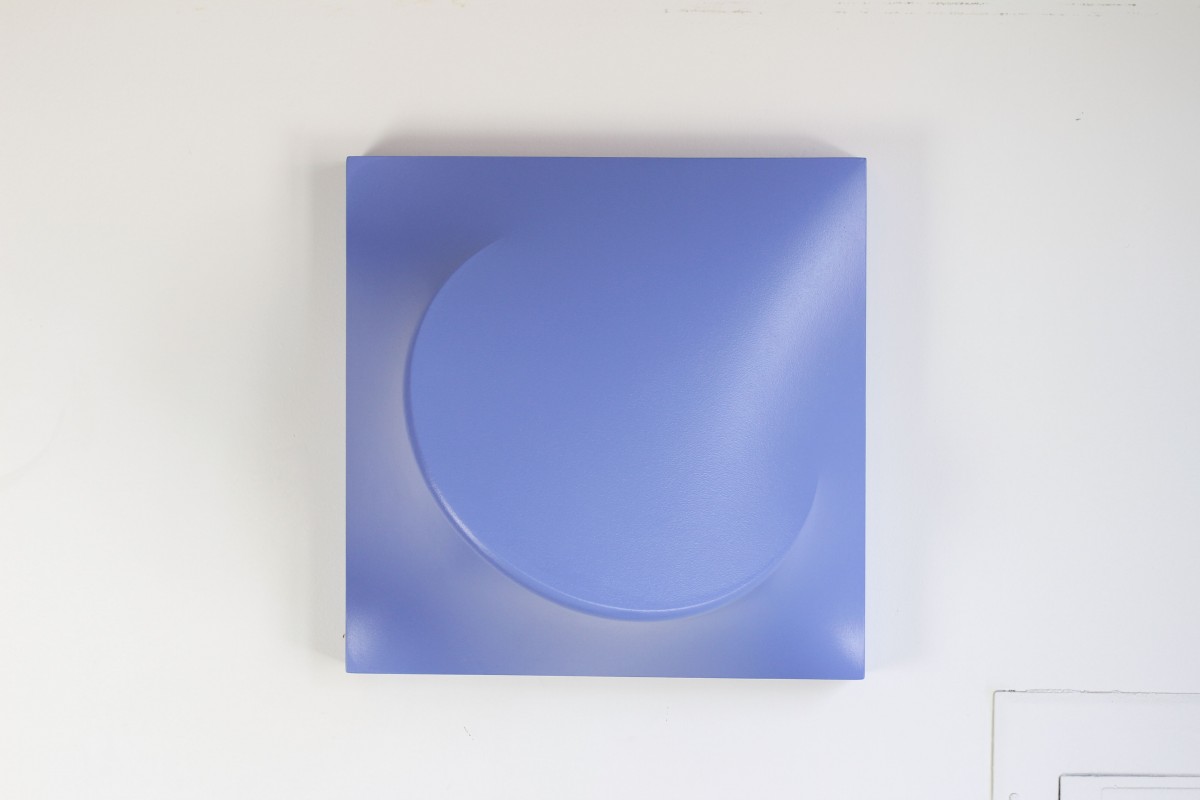 Systems . The exhibition includes a new collection of the artist’s signature shaped paintings created by

standard, rectilinear picture plane. In contrast to much of McCurdy’s previously created objects that

have referenced the human body, including those in her 2018 exhibition Personal Boundaries , this

body of work invites viewers to consider them in relation to celestial bodies of the universe.

McCurdy is driven by an interest in mankind’s quest to understand the mysteries of outer space.

forces, man persistently seeks answers. She sees this condition akin to viewers’ desires to discern the

construction of her work: thin, painted spandex hides the mechanisms that create each object’s

protrusions, yet an urge to uncover what lies beneath remains. A fascination with these boundaries,

whether physical or mental, micro or macro, remains at the core of McCurdy’s practice.

All of the known planets in our Solar System are represented in Sun Systems.  As in nature, the

installation is anchored by the largest entity, the Sun, and surrounded by interpretations of each planet

from Mercury to Pluto. The single and multi-panel wall sculptures reflect each entity’s characteristics,

ultimately captured through a deliberate execution of minimal form and color. Neptune, for instance, is

represented in Faint Ring in Liquid Ice  (2019). Alluding to the ice planet’s barely-visible rings, a circular

disc juts out at an angle, its rim forming a ring that swoops out and returns to vanish beneath the cool,

lavender-blue surface. The spandex in other works referencing black holes is stretched back through

the support, creating a spherical void in the object. McCurdy increases the complexity of form found in

many of these works, introducing nuanced parabolic curves and pieces that both protrude and retract

in a singular composition. This direction serves as a testament to the ever-expanding development of

Sun Systems  is an inquiry into our perception of things known and unknown, seen and unseen. As the

what lies beyond, so does McCurdy’s expert use of spandex. Even so, her paintings continue to ignite

curiosity and a longing to delve deeper.

Art in Baltimore. Her work has been included in gallery exhibitions in Philadelphia, Dallas, Los Angeles,

New York City, London, and Paris, and she recently completed a site-specific installation at The

Standard, Hollywood hotel. McCurdy has previously exhibited work at the Dallas Art Fair as well as the

inaugural edition of Spring/Break Los Angeles. In addition to her own practice, Samantha also runs an

art space and intellectual pavilion called That That, which relocated with her move from Dallas to Los