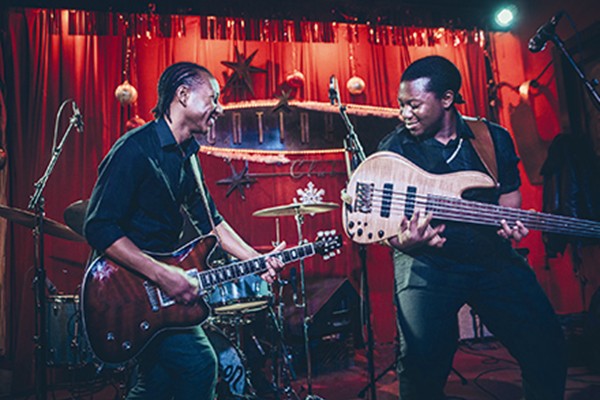 A modern take on old-school blues, soul and funk

The Peterson Brothers combine youthful energy and modern influences with old-school blues, soul and funk to a create a sound that is uniquely their own. Their live shows feature jam-band style improvisation. The Peterson Brothers have toured throughout the United States, and had the opportunity to play with and open for Gary Clark Jr., Robert Randolph and the Family Band, Kenny Wayne Shepherd, Buddy Guy, the late B.B. King, and other musical greats. They also have played festivals throughout the country, including the Chicago Blues Festival, Austin City Limits Festival, the Old Settler’s Music Fest, Kerrville Folk Festival, Brews & Barbecue, and many more. With a standing-room-only weekly residency at Austin’s famed music hall, The Continental Club, The Peterson Brothers have been referred to as “the future of Austin music” by Mark Murray of Sun Radio and “some of the most talented musicians I have seen come out of Austin” by Jamfeed.

With the ever-expanding sound of conjunto music, it might not be too unusual to hear an accordionist talk about melding the accordion styles of Paulino Bernal, Steve Jordan, Ramon Ayala, Mingo Saldivar and Tony De La Rosa. But spice up that tradition with the funk/punk/rock gyrations of the Red Hot Chili Peppers and the metallic rage of Guns N’ Roses, and you’ve got a sound that speaks directly about one individual – Albert Zamora. As a singer, songwriter and accordionist from Corpus Christi, Albert has found the key to creating a style that is exciting, youthful and powerfully defiant. Over the years, Albert and his progressive conjunto group, Talento, have been driving audiences into dancing frenzies with his explosive accordion playing and the group’s ability to interact with the crowd. The hard funk polyrhythm of Albert’s accordion and his distinctly melodic songwriting that make their sound instantly recognizable. Albert Zamora made his presence known in the conjunto world with the first hit single, “La Prieta Casada,” which showcases Zamora’s explosive skills on the accordion. His 2009 album, Heir to the Throne, was nominated for a Best Tejano Album Grammy Award.