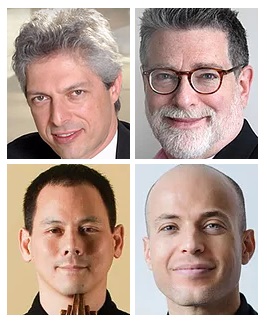 
— presented by —
Chamber Music Society of Fort Worth
0
MILES

On Saturday, February 8 at 2:00 pm in the auditorium of the Modern Art Museum of Fort Worth, Gary Levinson, Artistic Director of the Chamber Music Society of Fort Worth, will lead an ensemble of exceptional chamber music artists in a concert titled “Regal Passions.” The title “Regal Passions” makes a reference to the passion of the three works on this program which all exhibit a nobility bordering on restraint. The concert will be preceded by the very popular Pre-Concert Conversations beginning at 1:15 pm also in the auditorium.

Opening the concert is Beethoven’s Piano Trio No. 7, Op. 97 “Archduke” composed in 1811 and named for its dedicatee, Archduke Rudolf of Austria. The two other works on this outstanding program include Piano Quartet in A minor, Op. 67 by Turina and Piano Quartet No. 2 in E-flat Major, Op. 87 by Dvořák.

The Pre-Concert conversation begins at 1:15 in the Museum auditorium. Come early for the concert and gain more insight into the works being presented.