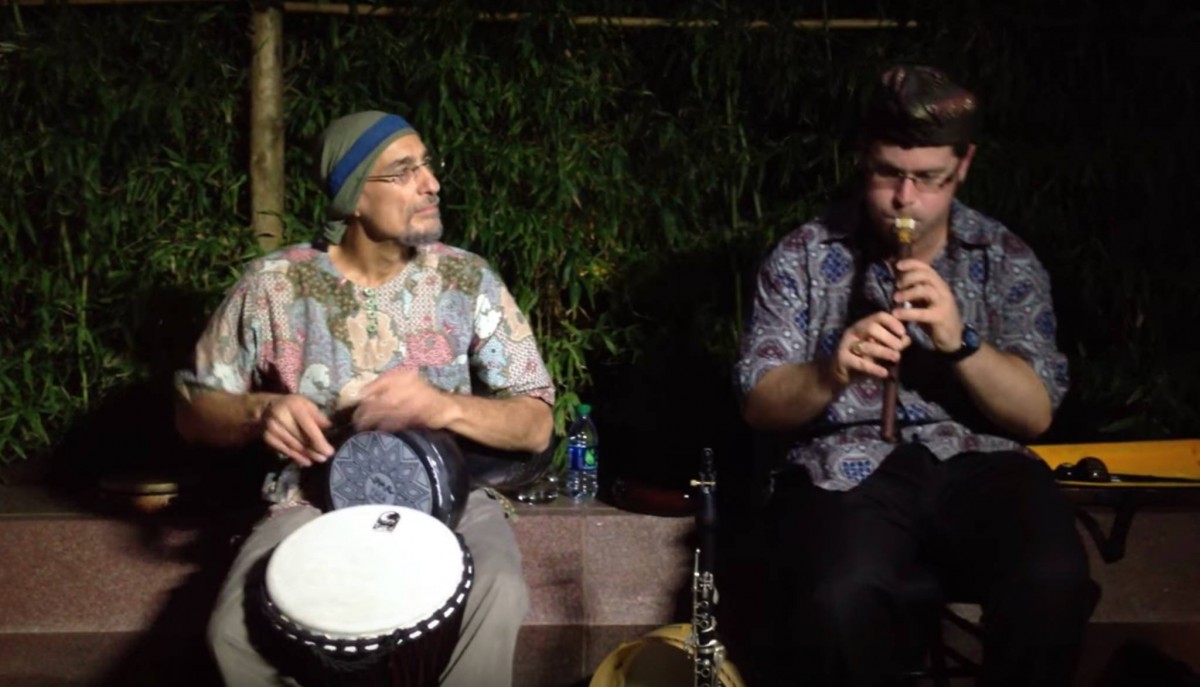 Shop opens at noon
Event starts at 7:30p
Music begins at 8p
$10, no one turned away for lack of funds
BYOB

Drum and Wind is a duo featuring master musicians Jamal Mohamed on percussion and Jonathan Jones on woodwinds. They explore melodies, textures and improvisations using an array of acoustic and electronic instruments, draw inspiration and musical ideas from traditional music from a wide variety of cultures. They have performed together around the world using rhythms and melodic content from Africa, Asia and the Middle East as well as contemporary American music. It’s a performance you don’t want to miss.

Jamal Mohamed has been a featured artist in many international music events having performed with Sting, Mark O’Connor, Giovanni Hidalgo and many other well known artists. He has presented percussion workshops at venues worldwide, including Berklee College of Music in Boston; the National Institute of Fine Arts in Mexico City; the Tokyo School of Music in Tokyo, Japan; the American University in Cairo, Egypt; the Center for World Music in Bali, Indonesia; and the University of Hong Kong, to name a few.

A native of Lebanon, Jamal grew up in the Chicago area, where he was exposed to rich blues and jazz traditions as well as the Middle Eastern music he heard at home. Known for his virtuosity on the doumbek, Jamal has incorporated many innovative jazz and Latin styles with this ancient instrument. He is acknowledged as a master craftsman and builds many of his own instruments. In 2010 Toca Percussion introduced the “Jamal Doumbek,” a signature drum he designed with Toca. In 2018 Toca introduced 5 new “Jamal” signature drums including riq (Arabic tambourine) and mazhars (Arabic frame drums).

Jamal was one of the founding members of the percussion group Ddrum, the 2010 winner of Drum magazine’s award for best percussion group. The group has been featured in two documentaries, one an Emmy award winning PBS short film that documents their travels and observations as related to World Percussion and the other, “Gamelan DDrum”, directed by John Bryant, about the group’s collaboration with composer and Rock and Roll Hall of Fame drummer Stewart Copeland of the “Police”, and the Dallas Symphony.

Jamal is currently on the faculty at the “Meadows School of the Arts, Southern Methodist University” where he teaches percussion, and directs the “Meadows World Music Ensemble” He is also the founder and director of SMU in Bali”, a study abroad program that explores the arts and culture of Indonesia. He is also active as a performer currently with Jazz band “Jampact”, World Music group, “Mandala” and the improvisational duo with Jonathan Jones “Drum and Wind”. For further information, visit: http://www.jamalmohamed.com.
Jamal Mohamed plays and endorses:
Toca Percussion
Sabian Cymbals
Pro-Mark drum sticks
Cooperman Frame Drums

Jonathan Jones is described in The Dallas Morning News as "a passionate and virtuosic musician responsible for all-out playing." He has performed as a clarinetist, saxophonist, DJ and World Musician all over the globe. He performed as a DJ artist at the "Lake Toba Festival" in Sumatra, Indonesia. His jazz group has toured all over Italy including the "Jazz in Campo" Festival. With world music group "The Bridge" he has made several international appearances including China, Java and Bali.

Jonathan has performed alongside acclaimed artists' such as Peter Gabriel, Diana Ross and Idina Menzel. Jon has also performed the European premiere of Ricky Ian Gordon's Orpheus and Euridice in Italy. Other appearances have been in the Czech Republic, Germany, Java, Mexico, Poland and Sumatra.

Texans In Line For Grammy Gold