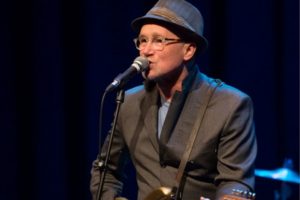 Over the course of Marshall Crenshaw’s recording career that’s spanned three decades, 13 albums and hundreds of songs, the Michigan-bred artist’s musical output has maintained a consistently high level of artistry, craftsmanship and passion, endearing him to a broad and loyal fan base and drawing comparisons to Buddy Holly. After getting an early break playing John Lennon in a touring company of the Broadway musical, Beatlemania, Marshall began his recording career with the now-legendary Indie single, “Something’s Gonna Happen.” His growing notoriety in his adopted hometown of New York City helped him win a deal with Warner Bros. Records, which released his self-titled 1982 debut album. That collection established Marshall as one of the era’s preeminent rock ‘n’ rollers, confirmed by his subsequent albums, Field Day, Downtown, Mary Jean & 9 Others, Good Evening, Life’s Too Short, Miracle of Science, #447, What’s in the Bag? and Jaggedland. Marshall’s compositions have been covered by artists that include Bette Midler, Kelly Willis, Robert Gordon, Ronnie Spector, Marti Jones and The Gin Blossoms, who co-wrote with him the Top 10 single “Til I Hear It From You.” He’s also provided music for several film soundtracks, appeared in the films La Bamba (as Buddy Holly) and Peggy Sue Got Married, and was nominated for a Grammy and a Golden Globe for writing the title track for the comedy film, Walk Hard: The Dewey Cox Story. Since 2011, Marshall has hosted his own radio show, The Bottomless Pit, on New York’s WFUV. His eclectic resume aside, songwriting and record-making remain at the center of Marshall Crenshaw’s creative life