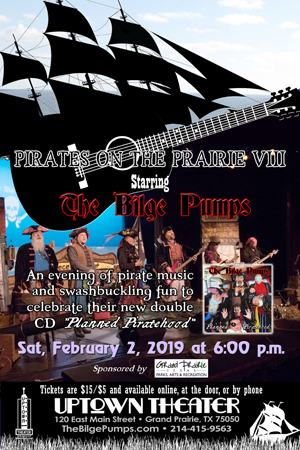 Pirates on the Prairie VIII

Ibidis Mortem Productions is proud to present Pirates on the Prairie VIII, the pirate music concert that will have everyone talking (like a pirate), taking place Sat, February 2th, 2019 at 6:00 p.m. at the Uptown Theater in Grand Prairie, TX.

The concert will feature the Official Pirates of Grand Prairie, the Bilge Pumps, in an event to appeal to everyone's inner buccaneer. This concert will serve as the CD Release Party for the newest album from the Bilge Pumps, "Planned Piratehood", the long-gestating double-CD from which the band will be performing two sets worth of material.

It will be an evening of nautical nonsense and swashbuckling fun for the whole family with not only music and comedy on stage but caricature artists and face painters in the lobby before the show and during intermissions.