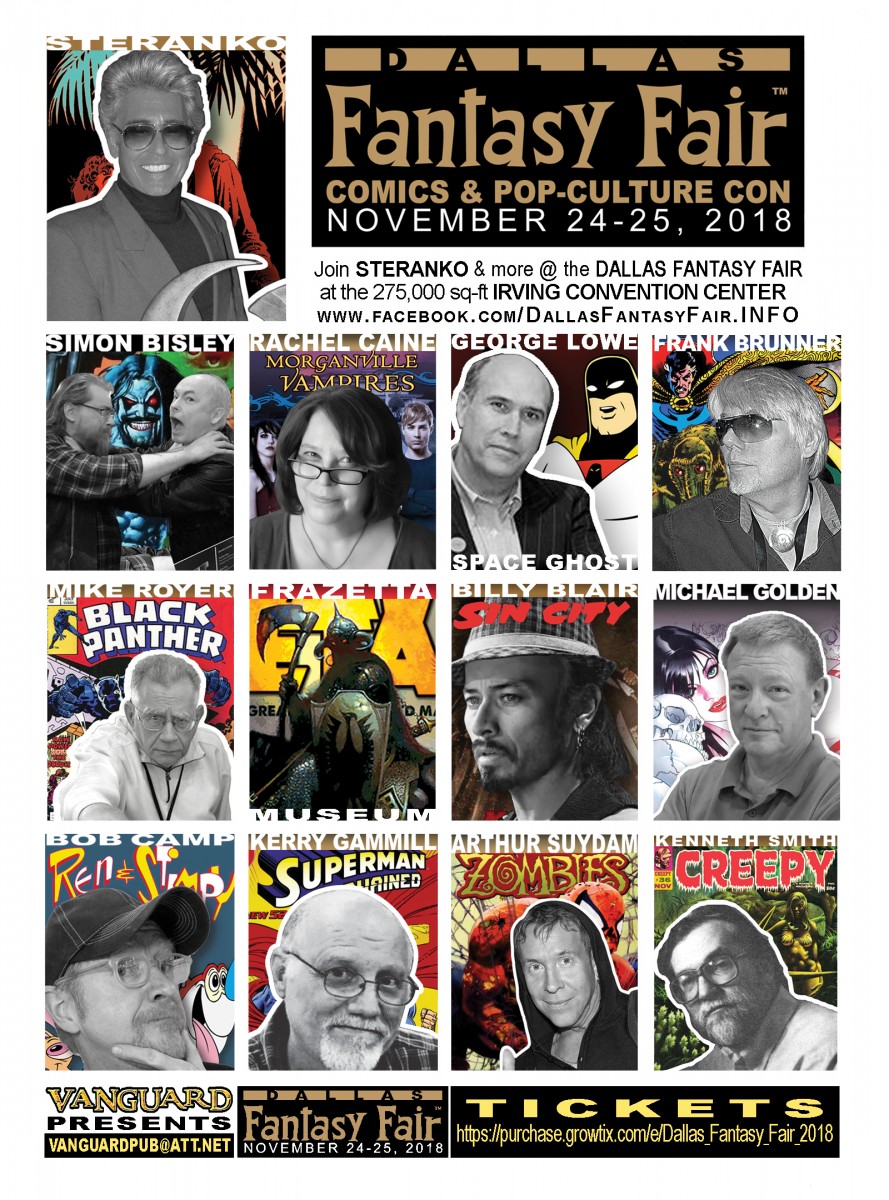 The third-largest comic book convention in the country in the early 1990s, The Dallas Fantasy Fair is due to make a long-awaited comeback this Fall.  The storied convention is a weekend-long celebration of all things fantasy, sci-fi, horror, superheroes and everything in between; boasting a guest list of legendary contributors in the fields of comic books, movies, and TV, seldom seen in North Texas. Residents of the Dallas-Fort Worth metroplex will no doubt be delighted to meet such notables as:Jim Steranko: An absolute legend within the comics and film industry, Steranko has worked with Spielberg, Coppola, Lucas, Bakshi, and more!  • Bram Stoker's Dracula (Coppola, 1992) A grand solo screen credit as "Project Conceptualist"
• Raiders of the Lost Ark: Indiana Jones character & pre-production design.
• Justice League Unlimited (2005) "Ties That Bind" writer.
• Capt America Winter Soldier (Thank You & closing credits Steranko homage art)
• Co-creator Agents of S.H.I.E.L.D.   Frank Brunner: A defining voice from the Bronze Age of Comics, Frank Brunner is famous for his contributions to Doctor Strange, Red Sonja, and Howard the Duck.  He worked on the made-for-TV DOCTOR STRANGE film in the late '70s, worked foe every major animation studio in California through the '80s and '90s, and his story, “Death of the Ancient One,” provided much inspiration to the 2017 smash hit blockbuster DOCTOR STRANGE from Marvel Studios! Rachel Caine: NYT, USA Today, WSJ #1 horror and fiction author and winner of countless RT Booklovers Association awards; the wordsmith extraordinaire behind the beloved bestselling Morganville Vampires book series. Ms. Caine is at present working on the Morganville live-action adaptation; coming soon to a streaming source near you! Kerry Gammill: One of the finest artists to ever grace the Superman comic book, Kerry has also made quite a career as a creature designer for dozens of popular horror and sci-fi film and TV productions, such as: Stargate SG-1, The Outer Limit, Stephen King’s Storm of the Century miniseries, Virus (1999), and Can of Worms (1999), just to name a few.  Mike Royer: In addition to his contributions with Jack Kirby on his legendary New Gods series (now in production as a major feature film!), Black Panther, and Captain America, Mike is most well known for his work within the Walt Disney corporation as the company’s greatest-ever artist for Tigger!  Arthur Suydam: Suydam’s name exploded after his monstrous art graced the covers of the many Marvel Zombies titles. The Spike Award-winning project largely contributed to the world-wide zombie phenomenon. Famous as THE ZOMBIE KING, Suydam is also revered for his work on Heavy Metal, Ghost Rider, Wolverine, The Walking Dead and Deadpool. Bob Camp: Emmy-nominated co-creator of the often controversial, ever awesome Ren and Stimpy animated series from 1993.  Bob’s immeasurable input on the world of animation also includes concept design and production on such beloved classics as Thundercats, The Real Ghostbusters, Tiny Toon Adventures, and Cow and Chicken. Frank Frazetta's art inspired the Conan movies, John Carter of Mars, Tarzan and Frazetta collaborated with Director Ralph Bakshi on the 1981 film Fire & Ice. His revolutionary paintings of barbarians and beasts now sell for a million dollars or more. For the first time, the late artist icon's son, Frazetta Jr comes to Dallas to represent The Frazetta Art Museum.
ACTORS appearing include • Billy Blair (Sin City II, Alita: Battle Angel, etc.)• George Lowe (the voice of Space Ghost)and• Ed Guinn (Texas Chainsaw Massacre)
And it’s all happening the weekend of November 24th at the Irving Convention Center!
For more info, see our facebook page: https://www.facebook.com/DallasFantasyFair.INFO/