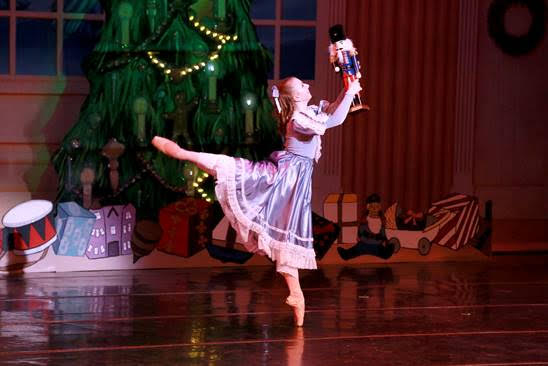 TICKETS ON SALE FOR BALLET ENSEMBLE OF TEXAS’

THE NUTCRACKER AT IRVING ARTS CENTER

Ballet Ensemble of Texas, one of Dallas’ best-reviewed pre-professional ballet companies, is ushering in the holiday season with its 22nd annual production of The Nutcracker.  American Ballet Theatre’s Patrick Frenette will perform the role of Sugar Plum Cavalier.

“I’m thrilled to return to the Dallas area to work with such gifted young dancers who represent the future of dance,” Clower said.  “This updated production of The Nutcracker showcases the iconic choreography of the original Ballet Russe version of the Snow pas de deux, surrounded by the exhilarating snowflake scene, a favorite of audiences from previous Dallas Ballet productions.”

Clower also is bringing back choreography for Arabian and Mirliton variations that hasn’t been presented in Dallas in 20 years, and new choreography for the Russian dancers. “The energetic performance is wonderful and expected to bring the house to its feet,” added Clower.

This season’s production of The Nutcracker will feature Ballet of Ensemble of Texas’ very own Audrey King performing the role of Sugar Plum Fairy.  Ms. King will be partnered by guest artist and American Ballet Theatre member Patrick Frenette as her Cavalier.

The Nutcracker is a beloved holiday story set to the musical score by Peter Tchaikovsky. A young girl, Clara, receives a toy Nutcracker from her godfather and it magically comes to life taking her on a journey through The Kingdom of Sweets.  Ballet Ensemble of Texas’ exquisite performance includes glistening snow, masterful choreography, and costuming designed with the finest detail.

The Nutcracker is supported by The Texas Commission on the Arts, the City of Coppell and The City of Irving through the Irving Arts Board.

The Ballet Ensemble of Texas is the resident ballet company of Coppell-based Ballet Academy of Texas (BAT). Under the direction of Lisa Slagle, a former Joffrey Ballet dancer, BAT has produced some of the country’s best-trained dancers that have gone on to be professionals with leading companies such as American Ballet Theater, Ballet West, Houston Ballet, and Pacific Northwest Ballet, and many international companies.

Known as one of the most energetic and inspiring teachers in the country, Thom Clower's evangelistic approach to teaching has touched the lives of dancers around the world for 40 years. With extensive training in the Vaganova, Balanchine, Cecchetti, and Bournonville techniques, Mr. Clower combines the qualities of each one of these styles to present a technique that is true and versatile.

Believing very strongly in Regional Dance America, Mr. Clower served as the Director of Ballet at numerous RDA Craft of Choreography Conferences (NCI), and at The Glenda Brown Choreography Project.  He has been a guest teacher for Regional Festivals since 1992, and faculty at the National Festival both in 1997 and 2007.  Mr. Clower has proudly served in the capacity of Adjudicator for SERBA, RDA/NE, RDA/Mid States, RDA/SW, and will once again Adjudicate for SERBA in 2019.

Since 2001 Thom Clower has worked around the world as a master teacher and choreographer. He has been a guest teacher for Oklahoma City Ballet, Pittsburgh Ballet Theater and Atlanta Ballet.  He has been a guest teacher at Broadway Dance Center, as Associate Ballet Master for Les Ballets Trockadero de Monte Carlo, and has served annually as Ballet Master for Young! Tanzsommer – Stars of Tomorrow International since 2002.  In August of 2018, Mr. Clower became the artistic director of the Ballet Ensemble of Texas and joined the faculty of the Ballet Academy of Texas.

Audrey King is in her fourth year with the Ballet Ensemble and is a student in the Academy’s pre-professional division for homeschooled students. She was a Top 12 Finalist at the Youth American Grand Prix Regionals in 2018 and was awarded the 2016 Elaine Harper Memorial Scholarship and the 2017 Marjorie Tallchief Scholarship, both through the Dance Council of North Texas. She attended San Francisco Ballet and Colorado Ballet’s Summer Intensives on scholarship this past summer.

Patrick Frenette was born in Vancouver, Canada and began his early training at the Goh Ballet Academy.  In 2008, his family relocated to California to further his professional ballet training with former ABT dancer Chris Martin and former Bolshoi Ballet dancer Dmitri Kulev. He was a two-time recipient of the Senior Grand Prix award at the Youth America Grand Prix’s regional competitions and, in 2011, was also awarded the Mary Day Award for Outstanding Artistry.

Mr. Frenette began studying full time at School of American Ballet in New York in 2012 and was awarded The Rudolf Nureyev Foundation Scholarship while there. He performed a principal role in George Balanchine’s Divertimento No. 15 in his graduation performance.

He was offered a job as an apprentice at American Ballet Theatre in 2013 and was promoted to the corps de ballet in January 2014.  He can be seen both dancing and being interviewed in the newest dance film, “Danseur”, which was released in the fall of 2018.