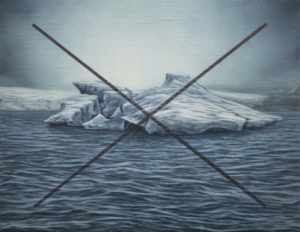 Arctic cartography often depicts the lines of latitude ending at the Arctic Circle leaving only an X marking the North Pole. As I traveled the Arctic in the summer of 2016 as a participant on the Arctic Circle Artist Residency and Expedition this map-territory relationship stuck with me. At the time I was immersed in a stark, rocky, frozen world as we traveled aboard a sailing ship. I approached this trip with a list of words to speak to the landscape and the intent of creating a film using a drone and underwater camera. Upon completion of my film project, an immersive three channel endeavor paired with a voice that speaks to/merges with the landscape, I returned to my trove of imagery from the Arctic with the intent of forming a new series of paintings.

This series of paintings is executed with deliberate attention to surfaces, in paint application, in variety of linen textures, or the use of absorbent grounds. The imagery shifts across the Arctic sea and landscape employing a pale monochromatic palette that speaks to the light and disorientation of the Arctic summer’s endless day. Each image is rendered directly from photographs that I took during the residency in the high Arctic, including an image of the pack ice edge at 81 degrees north, about 500 miles from the north pole. These seas, glaciers, icebergs hover in a moment of static illusion that must be negotiated by the formal presence of an X. Each image presents a visual quandary for the viewer as the X reinforces the painted surface but its transparency allows the viewer to re-enter the painting as a window into another world. These landscapes no longer exist as depicted, having shifted in the duration a year of winter’s snow and summers melt. The larger question at hand is- in what form will these places exist, if at all, in the coming years, decades, or millenniums?

In addition to the 2017 paintings of the Arctic, I have created a new body of work depicting our attempts to depart our planet. I was struck by the February 2018 Space X launch of the most powerful rocket in history, the Falcon Heavy. Along with the promise of large, Mars-bound payloads this launch deposited more pollution into the atmosphere. How do we catalog these new advancements? With wonder – as two of the three rocket’s boosters simultaneously returned to land, upright on their respective landing pads? With trepidation- as the sight of the power to take us to new planets may suggest we need a backup plan to earth? These new paintings are a meditation a significant moment in human history while also a study in muted color, surface, and the power of images.

These new paintings are positioned alongside Arctic sea and landscapes X’d out, and the uncommon, a film shot in the Arctic Circle with drones. Whether seen as advancements of technology, explorations of the unknown and known universe, potentially colonizing, or human ingenuity-  I believe these images further mire us firmly in the Anthropocene’s precarious future.