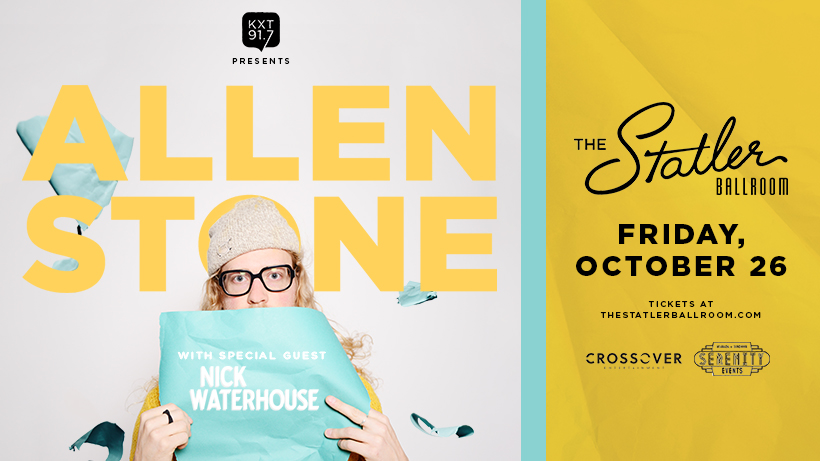 Soul/R&B artist Allen Stone is known for making uncompromisingly soulful music that transcends all pop convention. His vocals and melodic style show the clear influence of classic soul and R&B of the 1960s and '70s, while his lyrics reveal an idealism and passion that recall the folk-inspired singer/songwriters of the same era.

Born in Chewelah Washington, Stone started discovering those vocals as a kid, thanks largely to his parents’ influence. “My father was a minister so I spent about half my childhood in church, watching my mom and dad sing together and lead the congregation in song,” he recalls. By the time he was 11 he’d picked up a guitar and written his first song, and soon began self-recording demo tapes to pass along to classmates. Although Stone enrolled in Bible College after high school, he quickly dropped out to move to Seattle and kick start his music career. “I had an ’87 Buick and I’d drive up and down the west coast, playing any gig I could get just to try to put my music out there,” he says.

In 2010, Stone recorded an album called Last to Speak that he released digitally through his own Stickystones label. A second album, simply titled Allen Stone, followed in the fall of 2011, and quickly became an independent success story. Online sales took the album to the top of the online charts, and it placed on Billboard's Heatseekers chart, all without a formal distribution deal. The artist-friendly ATO Records label signed Stone in 2012, and reissued his eponymous album in the summer of that year. He then signed to Capitol Records and worked extensively with fellow singer and songwriter Tingsek. The result, Radius, was released in May 2015.

Stone is currently working on his next album, which is set be released on ATO Records later this year.