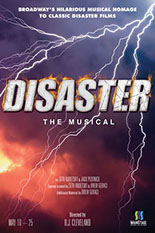 DISASTER! THE MUSICAL MAY 10-25, 2019 Broadway’s Hilarious Musical Homage to Classic Disaster Films by Seth Rudetsky & Jack Plotnick Disaster! is a new musical straight from Broadway, featuring some of the most unforgettable songs of the '70s. "Knock on Wood," "Hooked on a Feeling," "Sky High," "I Am Woman" and "Hot Stuff" are just a few of the scintillating hits in this hilarious musical comedy with a book by three-time Emmy Award nominee and SiriusXM Broadway host, Seth Rudetsky, and Jack Plotnick. Go wild for this hilarious homage to the era of bell-bottoms, platform shoes, and the hustle. With larger-than-life characters, snappy dialogue, and some of the most recognizable songs of the '70s, Disaster! will have you dancing in your seat and rolling in the aisles.