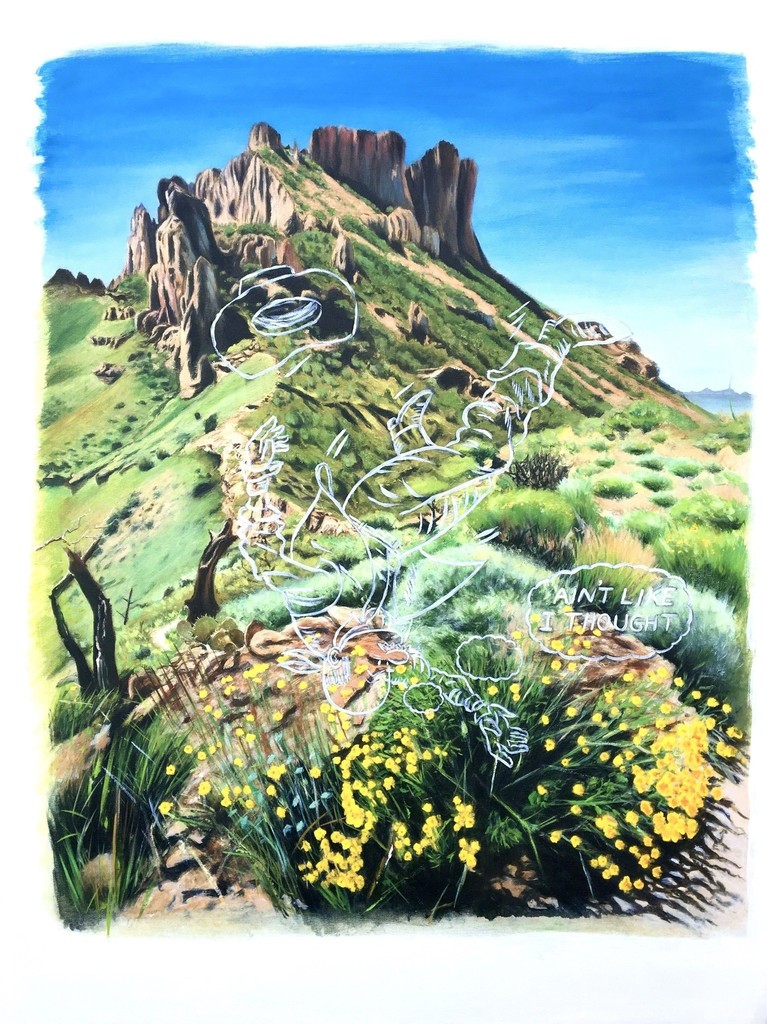 Ken Craft’s characteristic style combines original cartoon narrative with breathtaking scenic painting and drawing. The works bounce between two worlds - the painted landscape and the drawn comic - coming together to create a distinctive form of storytelling. In Ain’t Like I Thought, Craft’s two main characters Flirty LaMorte and Chief deal with love, anxiety, and philosophical meanderings through their adventures and misadventures in both the natural world and the art world.

Ken Craft (b. 1967 New Mexico) is an artist based in Dallas, TX where he lives with his wife, Carolyn, and their cats and dog. Craft’s work reflects an interest in combining representational painting alongside original cartoon ststorytellingScenes or imagery done in oil serve as either actual or emotional setting for the cartoons, which are usually done in ink. As much as a piece is meant as a finished painting, it is also designed to function as a series of working comics.

Craft himself has existed in two worlds for over 23 years now, maintaining a career as a professional firefighter while painting as often as he can. He has been in numerous group exhibits over the years in Dallas and has had 3 solo exhibits there. In 2015 he won the Top Choice prize at Artspace 111’s annual juried exhibit. In that same year, he was invited to exhibit in a group show at Mark Moore Gallery in Culver City, CA. In early 2016 he was in a 2 person exhibit with photographer Adam Neese at Ro2 Art in Dallas. He is currently looking forward to spending more time in his new home studio in the Cedars neighborhood of downtown Dallas.

Craft is represented in Dallas by Ro2 Art and continues to have work exhibited with Mark Moore Gallery online.

“This body of work expands on what I’ve been doing for a few years now; combining a comic book approach to storytelling along with oil painting. I’ve been experimenting with layering the images a bit more and I like where that has led formalistically. Conceptually, the ideas behind the work are very personal but are also taken, somewhat loosely, from Dante’s Inferno and from the writings of Anthony Doerr. What interests me in these books is the search for meaning and understanding; of each other and ourselves in the presence of great pain and suffering. Our yearning for connection and belonging often comes up short in the face of our many man-made horrors. And in the light of beautiful, mysterious, uncaring nature we recognize our vulnerability to forces that dwarf us. So what are we to do? Remember to have a smile or a laugh with a friend. Take note of the splendid and tread the lands with all the grace we may.” - Ken Craft, June 2018