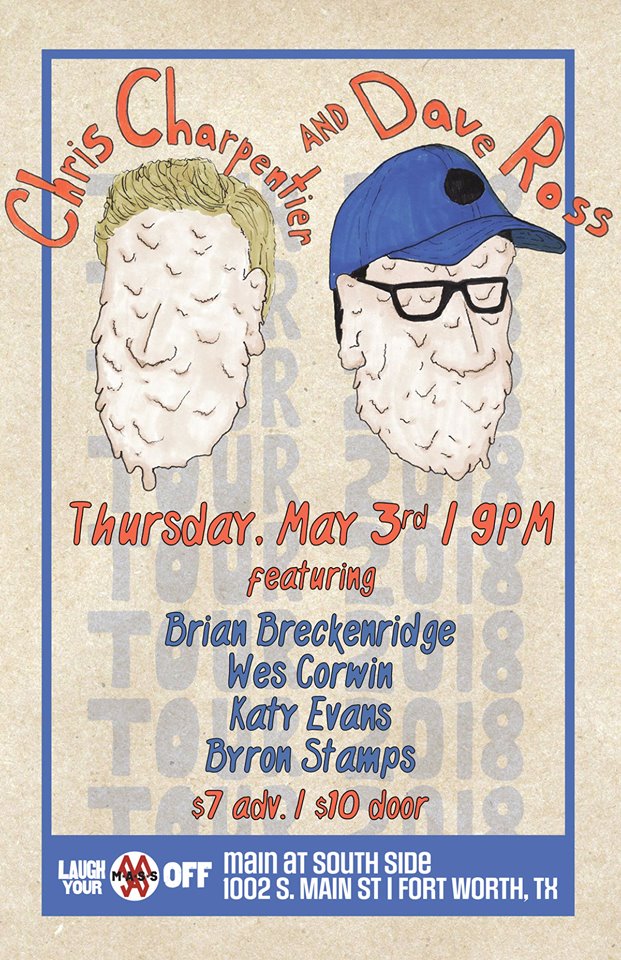 Dave Ross is a comedian based in Los Angeles, CA. He plays Trademarq in Comedy Central's Corporate. He tours all the time. Vans Warped Tour, Fest, SXSW, The Hollywood Improv, SF Sketchfest, The Bridgetown Comedy Festival and your basement are just a few of the places he's done stand-up. He's a Moth Grand Slam winner. He's been on This is Not Happening, Drunk History, WTF with Marc Maron and so much more.

Chris Charpentier is a stand up comic born and raised in Denver, Colorado. He was a "New Face" at the prestigious Montreal Just For Laughs in 2015 and was named "One to Watch" at the LA Riot Comedy Festival. Chris has also been in the Bridgetown, High Plains, OddBall and Aspen Comedy Festivals. You can often catch Chris opening the for hilarious Josh Blue, whom he met at their home club, the world famous Comedy Works.

Chris has appeared on Jimmy Kimmel Live! and has a recurring role in TruTv's "Those Who Can't". He also appeared on Viceland's "Flophouse" and FuseTV's "Uproarious".


Chris is a founding member of The Fine Gentleman's Club, a comedy collective, which also includes Sam Tallent, Nathan Lund, and Bobby Crane. He co-produced the hit weekly show Too Much Fun! for 5 years, a show whose guests have included Dave Chappelle, Kyle Kinane, and Rory Scovel. The Denver Post called the show “Hip, messy, exhilarating comedy with a side of PBR."

In 2015 Chris moved to Los Angeles and co-founded Everybody's Great, a bi-weekly show that includes live sketch, videos, and stand up comedy. The directing and filmmaking duo The Nix Brothers, and fellow stand up comics Haley Driscoll and Jordan Doll, also run the hit show.

Holy crap guys. These dudes are aweomse. But wait...THERE'S MORE!!

Speaking of doors, those open at 8pm. Show is at 9pm.