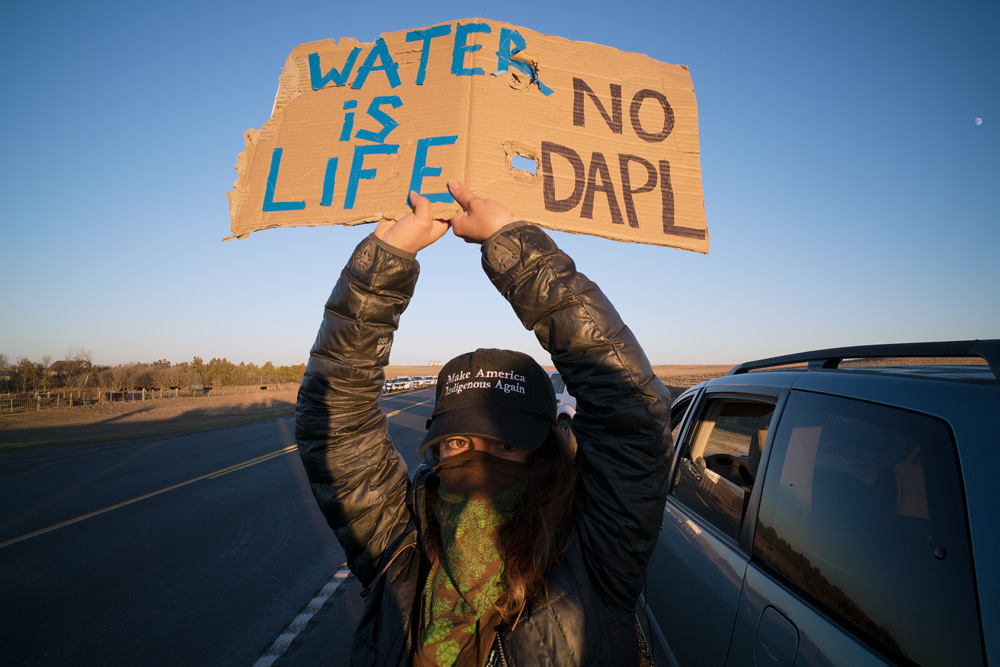 Join us Saturday, April 21, from 6 - 8 pm for Mni Wiconi, Honoring the Water Protectors, Photographs by John Willis and Artwork by the Tribe at Tammy Cromer Gallery. The project will be published as a book by the Center for American Places in the coming months.  During the Gallery Talk by John Willis, we will also have local Native Americans speak about the Water Protectors as well.

John Willis said this about the project:

“I had heard about resistance movements, led by the Standing Rock Sioux Tribe supported by non-Native allies, against the project to build an oil pipeline through the Dakotas, across Iowa, and into Illinois. In early September 2016, I headed west to witness the efforts of the resisters, or Water Protectors, as they chose to be called. Drawn to their dedication, I went to the Oceti Sakowin (“Seven Council Fires”) Camp in North Dakota, one of several camps set up to accommodate the resisters and their allies.

The 1,172-mile-long Dakota Access Pipeline (DAPL) would pass beneath the Missouri River just above the Standing Rock Reservation’s northern border. The tribe objected because any oil leak would go directly into the drinking water supply for both the reservation and millions of people living downriver, and because construction threatened tribal sacred sites in the area.

The Standing Rock Sioux filed suit in court to stop the Army Corps of Engineers from building the pipeline until a full environmental impact study could be done. When this and other efforts failed, the Mni Wiconi (“water is life” in the Lakota language) and NoDAPL (“No Dakota Access Pipeline”) grassroots resistance movements grew up.

Approaching Standing Rock, I encountered a National Guard roadblock with guardsmen carrying M16 rifles behind cement and razor wire barriers. Their purpose, they said, was to let travelers know there was a protest camp ahead.

At the Oceti Sakowin Camp entrance another security team, with neither weapons nor barriers, welcomed visitors to the camp and let them know that no guns, drugs, or alcohol were permitted; the camps were for nonviolent resistance through prayerful action. They requested that visitors check in at the media tent to learn the protocol if we intended to use any form of cameras, video, or media. They told us where to find the volunteer resource tent, kitchens, medical tent, and donations area.

An elaborate community had been set up in the camp, including a school for children, daily community meetings, a media group center, daily nonviolent action training, an art tent, and much more. Everything was free of charge—in traditional native fashion, money was not to be exchanged for services. The camps bustled with the energy of people wanting to help each other and assist in the cause.

I made six trips to North Dakota between September 2016 and December 2017, where I spent a total of eight weeks living out of a car at the Oceti Sakowin Camp. When I first arrived, there were estimated to be 500–700 supporters. On later trips I saw the camp size ebb and flow. At its peak around Thanksgiving, there were said to be 12,000–15,000. It is said that representatives from 240–300 native tribes, and many thousands of people from around the world, came in solidarity.

Around the camp’s sacred fire circle, people shared their reasons for traveling to support the cause. Although the news media barely mentioned the numerous pipeline leaks that occur annually in America, such leaks are extremely dangerous and difficult to clean up. In one such incident, in November 2016, a pipeline leaked 14,000 gallons of oil into the Ash Coulee Creek, a tributary of the Little Missouri River, near Belfield, ND. Another leak in November 2017 in South Dakota spilled 200,000 gallons in one day.

In sharing their own stories around the fire circle, people gave examples of fishing tribes whose waters became so polluted they could no longer eat the fish. Others told of communities that could no longer drink the water from their land, after allowing corporations or government to use their natural resources for fossil fuel or similar industries. One after another, people cited examples of the ways we are allowing corporate greed and human overconsumption to negatively affect our environment. We are killing the planet’s resources for future generations at a speed unsurpassed, solely because the desire for immediate profit is valued more than life for all generations. The movement was deliberately led by Indigenous people, but the cause is for all people.

Viewing the Mni Wiconi and NoDAPL protests as an isolated happening ignores the historical and cultural circumstances, and the recurring systemic practices, that led to the protests. Acknowledging the true, and complicated, situation can help us move forward in a better way. The call from the Standing Rock Sioux Tribe to resist the Dakota Access Pipeline was a call for humanity to recognize that our natural world is not an endless resource to be stripped without consequences for our actions. We must prioritize finding ways to live in harmony for the benefit of all, including the generations yet to come.

In service and solidarity, Oh Mitakuye Oyasin (“All My Relations”)