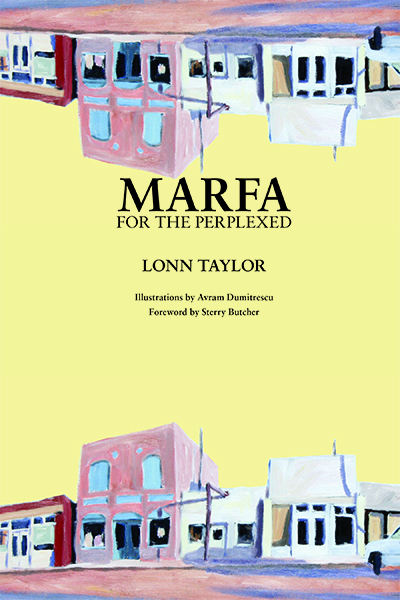 Marfa for the Perplexed with Lonn Taylor & Mark Lamster

Join us and the author of "Marfa for the Perplexed," Lonn Taylor as he answers all of your Marfa related questions and discusses the current state of the art scene. Dallas Morning News architecture critic and UTA architecture Mark Lamster will be moderating the conversation.

Free & open to the public.

Lonn Taylor is a historian and writer who retired to Fort Davis, Texas, with his wife, Dedie, after twenty years as a historian at the Smithsonian Institution’s National Museum of American History in Washington, DC. He received a BA in history and government from Texas Christian University in 1961 and did graduate work at New York University before returning to Texas to enter the museum field. He served as curator and director of the University of Texas at Austin’s Winedale Historical Center from 1970 to 1977; as curator of history at the Dallas Historical Society from 1977 to 1979; and as curator and deputy director of the Museum of New Mexico in Santa Fe from 1980 to 1984. He writes a weekly column about Texas called “The Rambling Boy,” for the Marfa Big Bend Sentinel.

Mark Lamster is the architectural critic of the Dallas Morning News, a Loeb Fellow at the Harvard Graduate School of Design, and a professor in the architecture school at the University of Texas at Arlington.

"Marfa for the Perplexed," is a collection of 60 essays about people and places in and around Marfa, Texas. Due to the work there of the minimalist artist Donald Judd between 1972 and his death in 1994, Marfa (population 2,000), located 200 miles from the nearest commercial airport in Texas’s isolated Big Bend region, has become an international art center and, more recently, a hip tourist destination. Marfa for the Perplexed reveals that Marfa and the surrounding country has always been a place of refuge for eccentrics and individualists, many of whom you will meet in the book’s pages. It exposes the rich mix of cultures that underlies the current Marfa art scene - the real Marfa beyond the buzz.

"Marfa for the Perplexed," is illustrated by Alpine, Texas artist Avram Dumitrescu. The foreword is by Marfa’s Sterry Butcher, a frequent contributor to Texas Monthly and other publications.