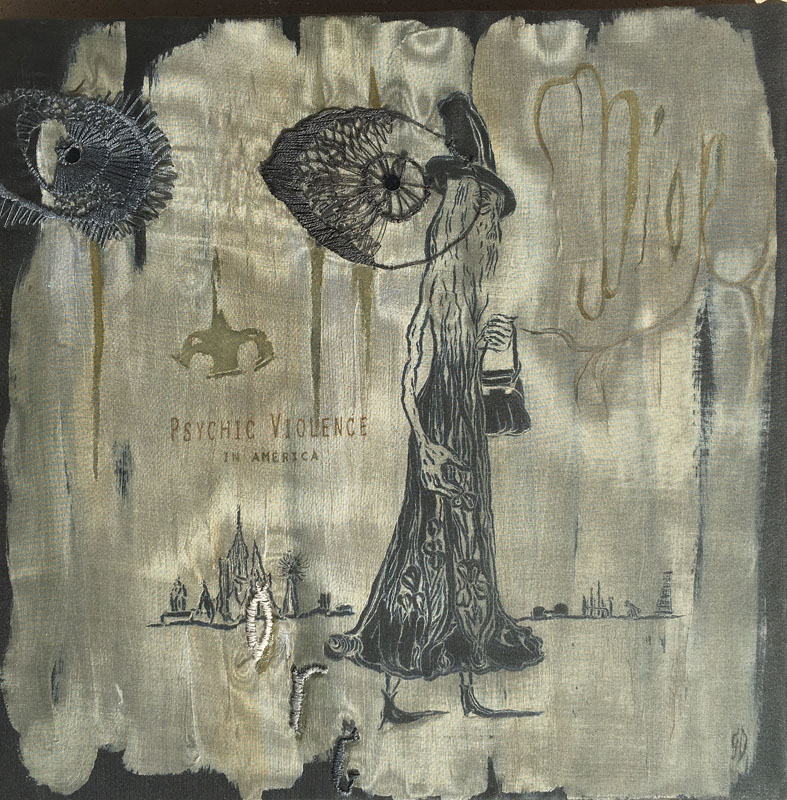 Ro2 Art is pleased to present ‘Psychic Violence in America,’ a solo exhibition featuring new works by artist Georganne Deen. The show will run from December 9, 2017, through January 6, 2018. There will be an opening reception held Saturday, December 9, from 7-10 p.m. at Ro2 Art, located at 1501 S. Ervay Street in Dallas’ Cedars neighborhood.

Georganne Deen is known for her dark, macabre paintings in which she combines monstrous subjects with ghostly text and poetry. In her upcoming show, Psychic Violence in America, Deen focuses on a type of unseen violence that runs rampant in politics, religion, and corporations all around the world. The often inflammatory, fraudulent, and corrupt nature of these omnipotent powerhouses causes psychological trauma, depression, and apocalyptic dread in the common person through a phenomenon that Deen has coined “psychic violence.” Deen’s provocative representations of political and corporate leaders allude to a startlingly dystopian worldview that may already be upon us.

Artist Georganne Deen calls her latest series of paintings Psychic Violence in America. She defines psychic violence as abuse bereft of evidence or that which has no laws to prohibit it. The series did not begin with the last election; it’s been progressing for years and originally focused on the self-inflicted violence inherent in narcissism and the unbridled faith in the ego, and on a larger scale: the marketing of corruption and depravity. But the past year and a half slapped a new expression on the face of psychic violence, and Deen turned her eye to the gurus of evil who’ve shimmied furthest up the greasy pole.

According to Deen, psychic violence hasn’t worsened in the last year, it’s simply become more visible. America, as we know it, was “settled” by people who murdered and disenfranchised its original inhabitants. How could this era possibly be worse than that? What makes the present so insufferable is that at one time we attempted to conceal disgraceful, perfidious behavior, whereas now the Commander in Chief shamelessly legitimizes bullying, slandering, threatening, demeaning, handing unqualified persons positions of power over others, legal looting, lying and exacerbating the financial inequity that was already blowing up before he came on the scene. Today one in four women aged 40 to 65 take anti-depressants to tolerate this Dickensian world. That’s what we used to call an epidemic.

Known for her unconventional methods of circumnavigating the minefields of psychological chaos, Deen says the matrix of willful indifference to corruption in which she’s felt trapped, and the need to record something, anything that acknowledges experiencing the drama of a dying world, brought to mind the idols of her youth: Goya, Ensor, Grosz and Dix. Driven by an awareness of the sheer volume of blabber that has smoked out all reasonable attempts to locate the truth in this shifting soap opera, she adopted the role of a court painter and PR agent for the age of fatuity, and proceeded to advance the notoriety of the sordid character types and events in formal (psychic) portraiture.

Says Deen of this epoch:

I hadn’t given much thought to the end of the world, an event forecast by the Maya in 2012. I did read something about one fractal world concluding, giving way to the birth of a new one. Nowhere did it mention the method by which the new world would be created. But 5 years into it I wonder if it’s forming via algorithms of our unconscious behavior driven by fear, greed and desperation. No one in their right mind would’ve created anything this abominable, would they? Whatever we do now, we have to consider the consequences far more seriously because the internet is causing the new world to manifest at the speed of lightning.

Deen was born in Fort Worth Texas in 1951. She studied at East Texas State University with a group of artists devoted to the experimental narrative which included underground comics and their incendiary, highly nuanced documentation of human nature. In 1980 Deen moved to Los Angeles to attend the California Institute of the Arts where the rich trappings of the California lifestyle coalesced with her own distinctive visual sensibilities to form a vocabulary that is both intimate and universal. Reporting on the depths and heights of consciousness, where we’ve gone wrong, what’s holding up progress and the occasional glimpse of paradise, has been a constant project for Deen, one that doesn’t lend itself to formulas or processes. The results can be painstaking, messy affairs at times but they convey experiences charged with splendor and turmoil.