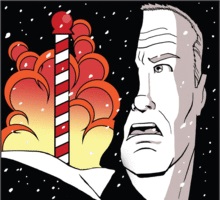 Sleigh Hard With a Vengeance

SLEIGH HARD WITH A VENGEANCE

Camp Death is proud to present their SIXTH world premiere show. SLEIGH HARD is a loving homage and spoof of the best Christmas movie of all time: Die Hard.  Running December 2-23 in repertoire with N47.  Performances will be Saturdays at 8:15, Sundays at 3pm, intermittent Tuesdays, Wednesday and Thursdays at 8:15. Tickets are on sale now at SLEIGHHARD.brownpapertickets.com

Show is Rated R for language

Mac Kane has the worst luck. He's a tough LA Cop, who decides to visit his wife living at the North Pole for a peaceful and relaxing Christmas Eve. Little does he know that Terrorists have other plans when they take over Santa's Workshop. Mac finds himself outnumbered and outmatched. This spoof of Die Hard and Action movies will make you laugh and think. Just kidding. It will make you laugh though.