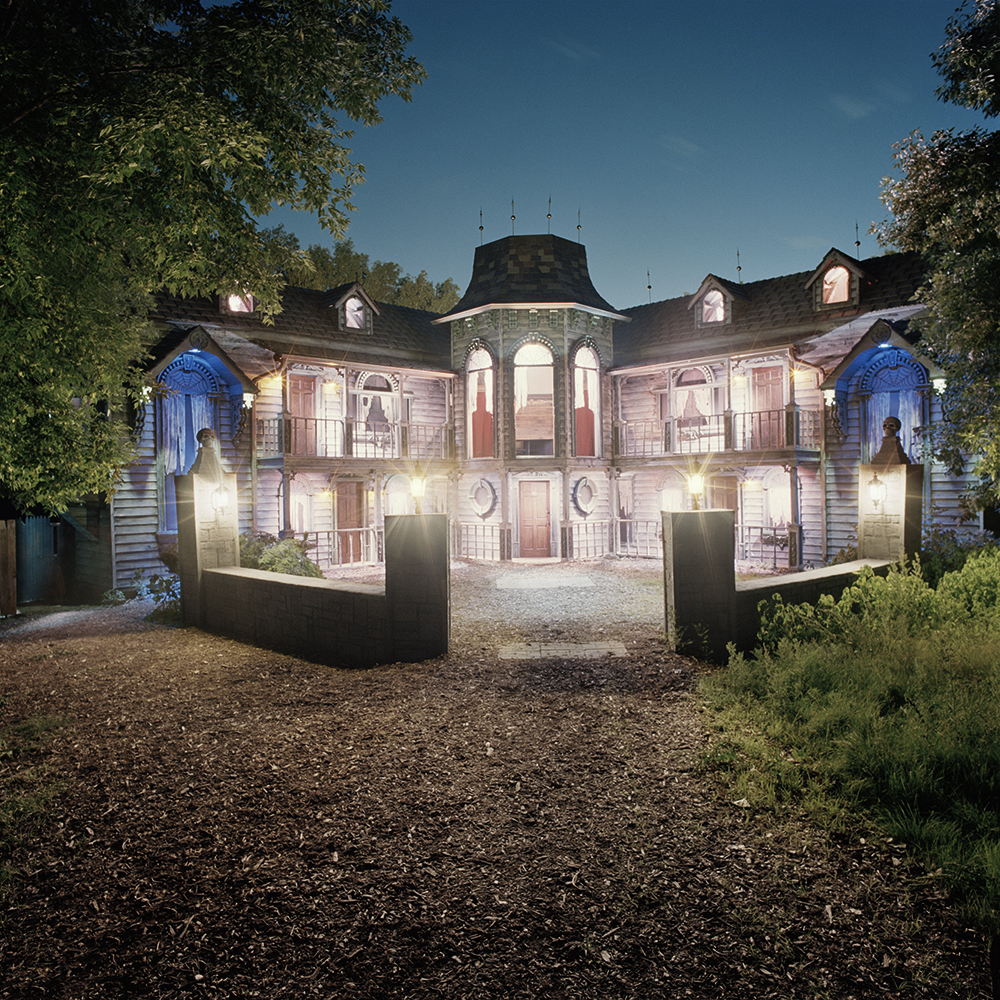 Thirteen themed haunted houses across America make up the imagery for Misty Keasler’s Haunt, 2015–2017. A driving force behind this series, which depicts interior rooms and exterior scenes, is that the subject matter takes photography to the edge of where it fails as a medium.  “Photographs,” Keasler explains, “are often used to document an experience, yet the experience of walking through a haunted house is completely lost in each of the still images. Also, the houses use sound, including fear frequencies, to unnerve you at a biological level; darkening effects, like lighting a house almost entirely with flashes of lightning; smells, like the very distinct smell of death, or cheap perfume—and these sensory components are missing. The tension in knowing any number of characters are waiting in the dark to jump out at you is lost in these images as well—the immersive experience just does not translate.” Where photography fails, however, is the point at which Haunt, detailing the various Baroque themes of the houses, creates another type of tension.  It allows lingering looks—something that is not possible at actual haunts where visitors are shuttled through on a forced and darkened path—and, the more we look, the more terrifying the scenes become.

Approximately 40 photographs (out of 104) that feature American haunted houses are included in this exhibition. These photographs are unpopulated, apart from a few gory figurative props such as severed heads, monsters, and dead bodies. Without people, the rooms themselves, in their display of psycho-narratives, become captivating portraits of persona. Who would put these rooms together this way? Who makes up the market for such places, paying to be scared? And what does this say about American culture?

Of this exhibition, senior curator Andrea Karnes says, “The imagery in Haunt is both beautiful and horrific, but moreover, the series magnifies the strangeness of the existence of such places, where fantasies are manifested. People desire, and will pay for, the sensation of fear, and that is a surprising and provocative revelation that comes out in these works.”

In addition to the photographs of haunts, this exhibition includes a separate series of approximately 15 portraits (out of 40) of haunted house actors in monster costumes.

Misty Keasler’s work is included in the permanent collections of the Museum of Fine Arts in Houston, Dallas Museum of Art, Museum of Contemporary Photography in Chicago, Kiyosato Museum of Photographic Arts in Japan, and the Ogden Museum of Southern Art. She holds an undergraduate degree from Columbia College and an MFA from Bard College. She lives and works in Dallas, Texas