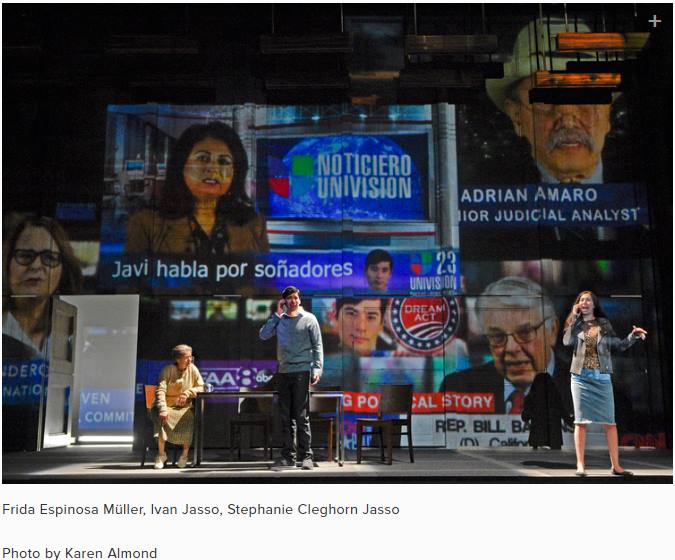 Written by Cara Mia Theatre’s David Lozano and the Dallas Theater Center’s Lee Trull, the play was inspired by the lives of local North Texas DREAMers who continue to face the threat of deportation although they have been educated in the US and largely identify as American. Deferred Action premiered in April 2016 and was named one of the “Outstanding New Plays of 2015-16” by the Dallas-Fort Worth Theater Critics Forum.

Deferred Action focuses on Javier Mejía, one of the immigrants known as DREAMers who arrived in the USA as an undocumented minor. Now, after years in the States, he finds himself caught in the tangle of existing immigration laws, new presidential policies, and the harsh reality of living in the shadows. Javier hopes that temporary administrative mechanisms like Deferred Action will be the answer to his dilemma. But will hope be snatched away? Can politicians who say they are the DREAMers’ friends be trusted? Deferred Action follows the lives, loopholes, and dangers of those who dare to dream. Originally co-produced with the Dallas Theater Center in 2016, Deferred Action returns for Cara Mía Theatre’s first regional tour. At each stop, Cara Mía Theatre will partner with the North Texas Dream Team to discuss issues surrounding the play, the DREAM Act, immigration reform, and Latinos in politics.

The show, which aims to shine a light on current issues surrounding student DREAMers and current political shifts—will take place in the University Theater in the RTFP Building for three performances September 21, 22, & 23, 2017 at 8 pm. General admission is $10 and tickets can be purchased through the box office over the phone or in person one hour before showtime.

The Department of Dance and Theatre Box Office is open Monday through Friday from 1 to 5 pm, and one hour prior to a performance. To purchase tickets or for more information, please call 940-565-2428