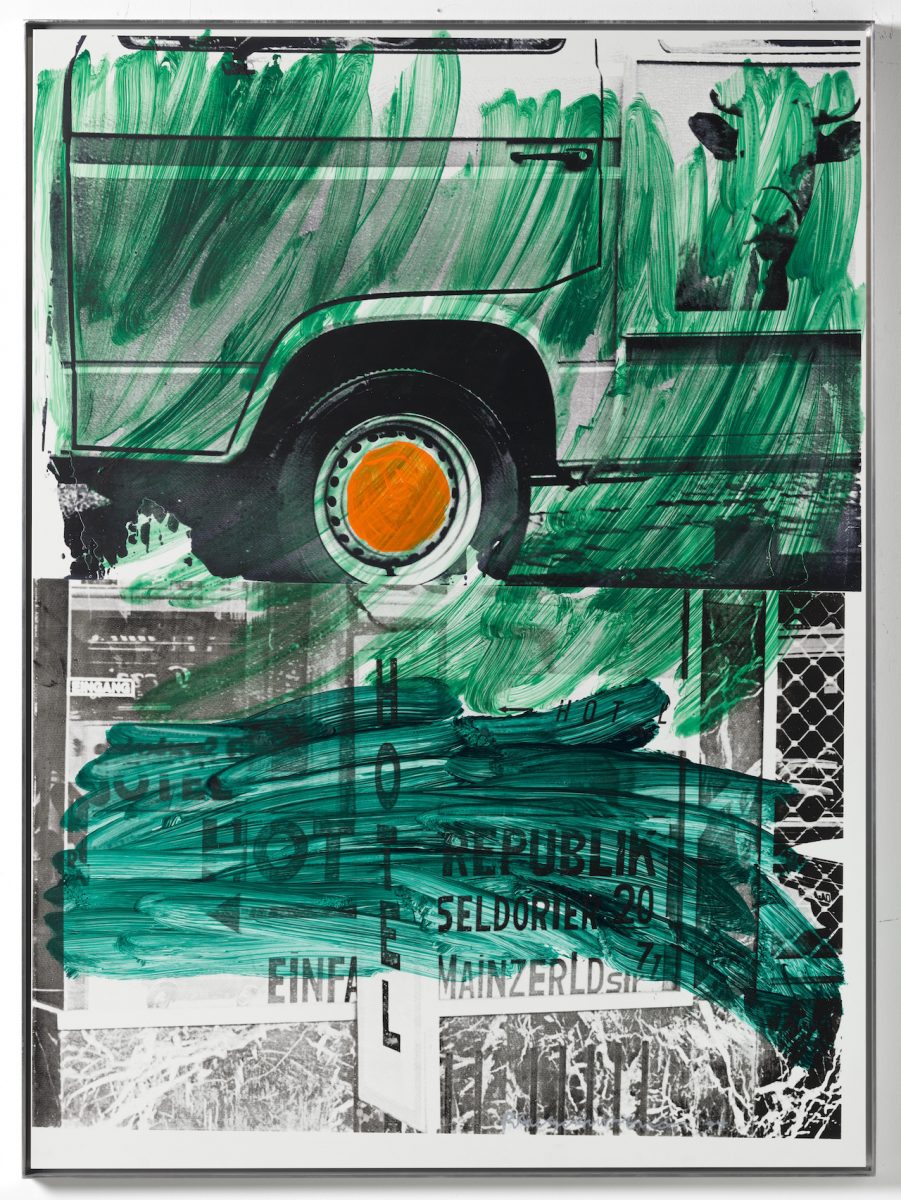 What is it about the scale, sites, and sounds of the open road that has made it an object of continuing fascination for contemporary art? The exhibition PARIS TEXAS takes its cue from key scenes in the celebrated 1984 film Paris, Texas by German avant-garde filmmaker Wim Wenders. PARIS TEXAS explores the modernist fascination with things like deserts, towering concrete overpasses, drive-in banks, billboards, and stripclubs. Like Wenders’s film, the exhibition does not seek to romanticize car travel but rather to see modern transport as a mode of displacement and estrangement, a place to expect the unexpected.

The opening scene, set to an iconic Ry Cooder guitar riff, shows Harry Dean Stanton wandering in a vast desert whose stunning beauty contrasts violently with the actor’s dingy appearance. Mute, lost, and alone, he makes his way towards the city of Paris, Texas, until picked up by his brother, who brings him to Los Angeles. The beauty of this car-dominated city, however, is not enough to keep him there. Instead he and his young son hit the road in search of his estranged wife, now a stripper in a Houston club. In the gripping final scene across a one-way mirror, Stanton’s and Natassja Kinski’s characters finally recognize each other only to remain forever apart. With Cooder’s haunting soundtrack, Sam Shepard’s powerful screenplay, and most of all Wenders indelible images, Paris, Texas is an ambivalent, late twentieth-century take on the classic Western.

PARIS TEXAS picks up where Paris, Texas leaves off. Born in Port Arthur, Texas, Robert Rauschenberg understood that our inner mental worlds are built of images from the outer world, things like ads, street signs, and store items, all rather messy and unruly. One sees this in his Grass Hotel (Urban Bourbon) (1994) where images of a van, cow-head, and hotel façade are made to dance upon one another via his trademark screenprint technique.

PARIS TEXAS also presents two books by the pop-conceptual artist Ed Ruscha dating from different stages of his career. The iconic Every Building on the Sunset Strip (1966) is the scrolling view of L.A.’s most well-known road as if seen from the window of a moving car. It is set alongside Ruscha’s limited edition publication of Jack Kerouac’s On the Road, with specially-embossed images illustrating the Beat poet’s famous text, the ur-manifesto of the open road.

In 2004, Ruscha produced a color photography book, Then & Now, which documents a 12-mile strip of Hollywood Boulevard in 1973 and again in 2004. Displayed are the various changes commercial development has wrought on entire city blocks, a typically wry Ruscha commentary on the transience of the urban landscape. One sees this here both in its original book format and in a specific selection of prints from a portfolio of 142 prints (2005). In the framed sheets, the marquee of the Chinese theater changes from James Bond to Harry Potter, while a new sign for “Graphic Process” is a coy reference to Ruscha’s own background as a graphic designer interested in the forms and meanings of language.

In the spirit of Then & Now, PARIS TEXAS highlights other changes that have befallen the open road. For one, the fact that roads aren’t always open because their borders are sometimes closed. This is the conceit of Belgian-born, Mexico-residing Francis Alÿs who took the outrageous step in The Loop (1999) of crossing the Mexican border between Tijuana and San Diego the long way around, that is, by traversing the globe by plane.

Other projects, such as New York-based Blair Thurman’s My First Rodeo (2016) are inspired by the materials, rather than the imagery, of car culture. His elongated, open canvas evokes, abstractly, not only a Lingotto racetrack but also the curvaceous vintage car bumpers and fenders that one sees throughout Wenders’s film. French-born, New York-based Davide Balula is more of a scavenger or, better yet, a recycler of the autoroute. The sculpture-relief Straw Wattles (2017) was built on-site in Dallas from a condensed, hay-like biodegradable material used in everything from flood control to golf course maintenance. Here Balula has transformed this most lowly and functional of stuffs into a haunting anthropomorphic object.

Finally, London-based Julie Cook’s Some Las Vegas Stripclubs reveals the at times sordid underside of the road, where distance from urban centers allows for the proliferation of the sex industry. With direct reference to the format of Ruscha’s books, Cook has published her own laconic photographs of various Vegas stripclubs. Not too unlike the one seen in Wenders’ film, these businesses are a reminder that the macho ethos of the open road has always gone hand-in-hand with a historically-informed division between the sexes.