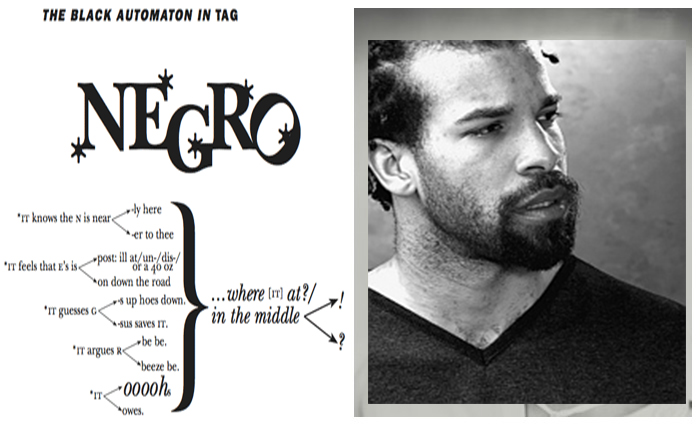 WordSpace and the South Dallas Cultural Center present the third season of African Diaspora: New Dialogues, a series of free readings and discussions dedicated to bringing Dallas audiences major contributors to the literary life of the African Diaspora.

Poet, performer, and librettist Douglas Kearney is the author of Fear, Some (2006), The Black Automaton (2009), which was chosen by Catherine Wagner for the National Poetry Series, Patter (2014). and Buck Studies (2016). Someone Took They Tongues (Subito Press 2016) collects several of his libretti. Mess and Mess and (2015) presents his writings on writing on poetics and performativity. His work has appeared in a number of journals, including Poetry, Pleiades, Iowa Review, and Boston Review; and anthologies, including Best American Poetry, Best American Experimental Writing (for which he has also served as a guest editor), Wide Awake: Poets of Los Angeles and Beyond, The Breakbeat Poets, and What I Say: Innovative Poetry by Black Poets in America. He has received a Whiting Writer’s Award, residencies/fellowships from Cave Canem, The Rauschenberg Foundation, and others.Raised in Altadena, CA, he lives with his family in California’s Santa Clarita Valley. He teaches at CalArts.

Events begin at 7:30 p.m. and will be hosted by Dallas novelist Sanderia Faye, whose novel Mourner’s Bench won the 2016 Hurston/Wright Foundation Award for debut fiction.