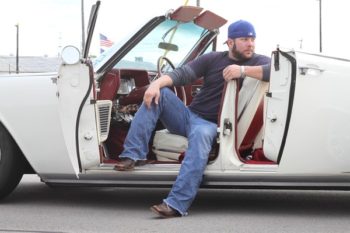 Like many young Texans growing up, Bleu Edmondson’s early years were spent focused on sports rather than music. He picked up a guitar for the first time during his college years, learned a few chords and his future was set. Bleu soon discovered that some of his favorite musical acts – Robert Earl Keen*, Radney Foster, Uncle Tupelo – shared a common thread: Lloyd Maines** either produced or played steel guitar on their recordings. A short time later, using a tape player in his dorm room, Bleu made guitar and vocal demos of his songs and sent the tape to Lloyd. The gamble paid off, and Lloyd became his producer. Bleu’s collection of songs ministers to the saint and the sinner in each of us. It’s a conglomeration of the touch points and influences that give us permission to question, confront and raise a little hell on Saturday night. Bleu’s lyrics convey a worldly perspective of one who has lived a life balanced on the edge of success and failure, love and hate, elation and despair with trademark grit and unselfconscious vulnerability intact. Bleu also knows how to crank up the amps and throw down hard. His raucous live show has earned him street cred and respect among his fans as well as his musical peers throughout Texas.