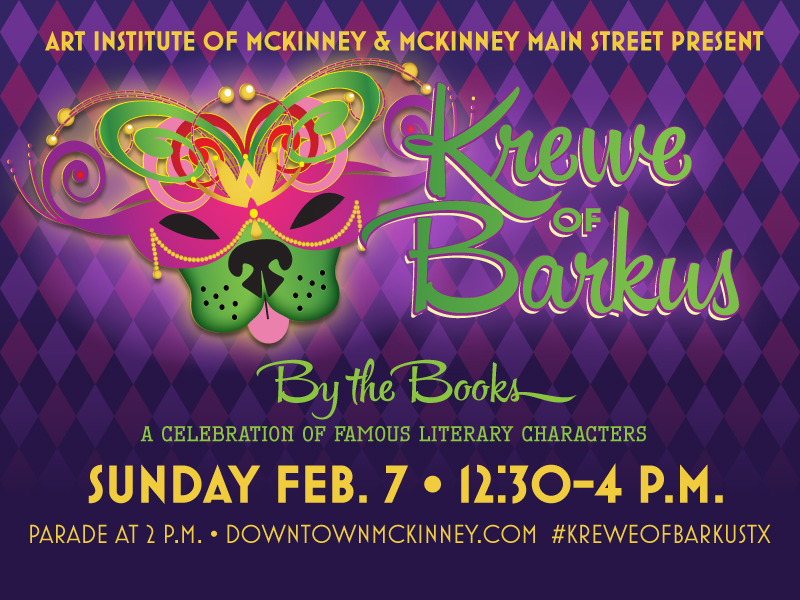 Krewe of Barkus is Coming!
“Barkus Does Books – A Salute To Your Favorite Characters In Literature”
When: Sunday, February 7, 2016, 12:30 to 4 p.m., parade at 2 p.m.
Where: Mitchell Park located one block west of Downtown McKinney

We are off to the races during the Krewe of Barkus Mardi Gras Dog Parade and Costume Contest as Downtown McKinney calls on all four-legged canine friends and their best buddies to share in the excitement. Embarking on its 14th annual successful run, Krewe of Barkus promises to be a howling hoot. In past years, more than 250 dogs participated in the parade alongside more than 4,500 spectators in awe of costumes, creatures and creativity. Patterned after the Mystic Krewe of Barkus in New Orleans, which was established to help abused and abandoned canines, Krewe of Barkus will feature a parade, vendor booths, interactive activities and more.

Vendor expo opens at 12:30 p.m., and all dog entrants will parade across the main stage beginning at 2 p.m. Over $2,000 in prizes donated by the merchants of McKinney will be awarded to costume category winners.