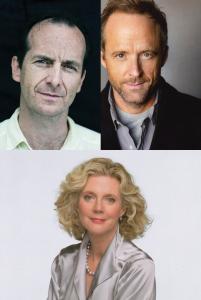 Blythe Danner has appeared on Broadway in Butterflies Are Free, for which she earned a Tony Award; Betrayal; A Streetcar Named Desire; and, most recently, The Country House. Her films include Meet the Parents, The Prince of Tides, The Great Santini, 1776, and the forthcoming Tumbledown. Her television credits include We Were the Mulvaneys, St. Elsewhere, Will & Grace, and Huff, for which she earned two Emmy Awards.

John Benjamin Hickey won a Tony Award for Best Featured Actor in a Play for his performance in The Normal Heart. His other Broadway credits include Mary Stuart, The Crucible, and Cabaret. He has a recurring role as Neil Gross on The Good Wife, and appeared for four seasons on Showtime’s The Big C, for which he received an Emmy Award nomination for Best Supporting Actor. He has appeared in films such as Pitch Perfect, Flags of Our Fathers, and the upcoming Tallulah. He currently stars in the original WGN television series Manhattan.

Denis O’Hare has appeared in such films as Milk, for which he won the Critics Choice Award for Best Acting Ensemble; A Mighty Heart; Michael Clayton; Duplicity; 21 Grams; Garden State; and Changeling. He won a Tony Award for Best Performance by a Featured Actor in a Play for his performance in Take Me Out and a Drama Desk Award for Outstanding Featured Actor in a Musical for his role in Sweet Charity. Recent television appearances include American Horror Story, True Blood, and The Good Wife.

All Those Boarded-Up Shop Windows? In Seattle, They’re Becoming Murals