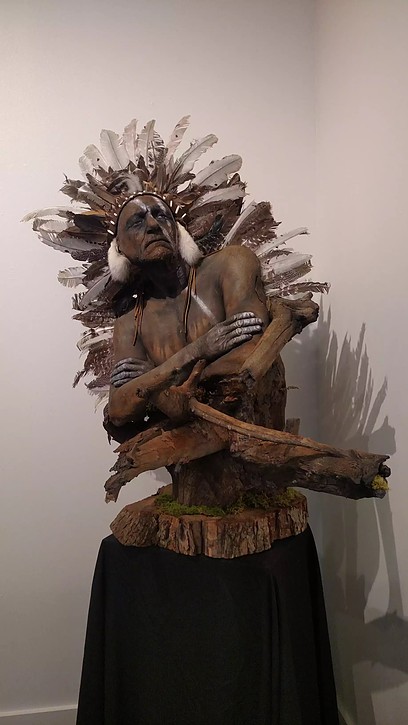 "My work is inspired by the deep roots that run through my family history involving the Native American culture and their beliefs. My ancestor Cynthia Ann Parker was an American child who was kidnapped at the age of nine by a Comanche war party. She would go on to fully assimilate herself into the Comanche tribe and live with them for the next 24 years of her giving birth to a son who would be the famous Comanche Indian chief Quanah Parker .

Cynthia was “rescued” from her captors and spent final sad years refusing to re-enter her old form of life and would eventually die of a broken heart some would say. My sculptures are greatly influenced by this story and are a celebration of life and the Native American’s connection with nature and all things that reside in it. This connection with nature that the Native American culture shared is a primary reason for the inclusion objects found in and provided by nature.

My work is greatly influenced by Native American philosophy and religion as well. The overwhelming love for nature and all things in it that all native cultures share has greatly inspired me and affected my life. My work is meant to remind people of the hidden beauty that lives all around us by merging life and nature into one."