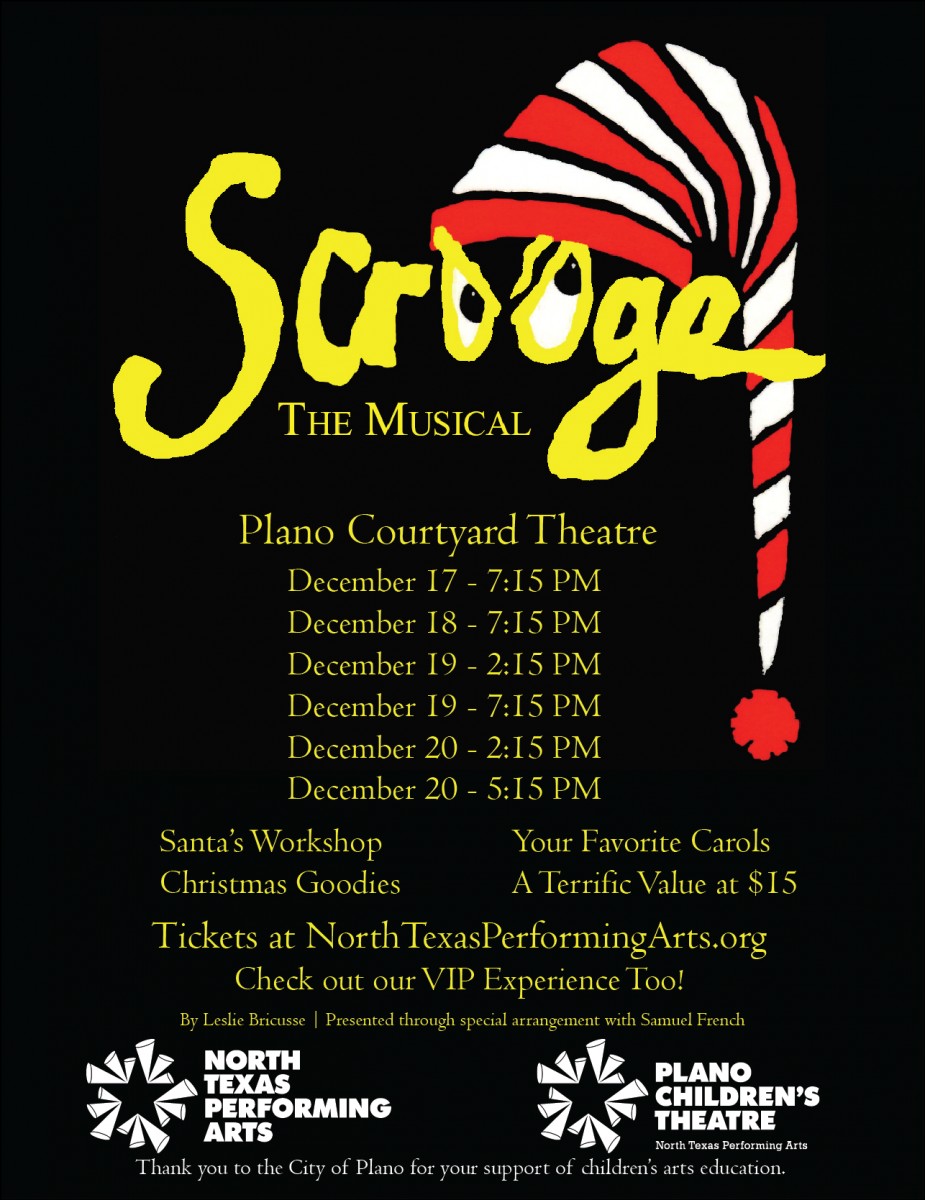 Join the North Texas Performing Arts (NTPA), and its Plano Children’s Theatre (PCT), for a special Merry Christmas with fun for the entire family. In this, the fifth year presenting this musical adaptation of the Charles Dicken's classic tale of the stingy old miser Ebenezer Scrooge, the NTPA - PCT has assembled its very best cast ever for this annual tradition.

This year’s offerings include a very special Merry Christmas Weekend and tribute to the City of Plano. Special events include a “last chance” for children to meet with Santa at Santa’s Workshop before each show. Each show also begins with favorite Christmas Carols of the cast and audience. Special after-show backstage tours featuring photo opportunities with Scrooge and the rest of the cast are also available. Special Christmas treats and gifts will be available before the show and at intermission.

NTPA encourages families to come together to enjoy this event, and we’re working tirelessly to create a memorable community theatre experience that we are delivering at a reduced rate of $15 per ticket. Tickets are available for purchase now at planochildrenstheatre.org

This year’s cast debuts the Plano Children’s Theatre’s new Managing Director, Michael Mazur, joining the company after his work on Broadway and serving as a Director and College Professor in Musical Theatre within the University of California collegiate system. The cast also includes star of the stage, Gennifer Stratton, who performed professionally from NYC to LA, and gifted singer/songwriter with a recently released album, Ashleigh Smith. Other cast members include one of Critical Rant’s “Top Performers in DFW Metroplex”, and Dallas Observer’s widely acclaimed actor, Chris Rodenbaugh. Debuting in the role of Marley is Executive Director of Frisco Community Theatre, Howard Korn. In his fourth year, Darrell Rodenbaugh reprises his title role as Scrooge. Creative Staff includes director Sara Akers, NTPA Executive Director and Founder. Joining Sara are the celebrated Musical Director and accompanist Mose Pleasure III, and TCU-trained choreographer Jaiquan Laurencin.

The cast also includes several families and individuals from the local community. Our local business community is also stepping up in a big way through sponsorship, gifts and even special promotions that will make this show one to remember.

Come support NTPA - PCT, a local non-profit charity, that strives to develop the character of youth through quality arts education. Scrooge - The Musical is our way to entertain our community, and say thank you to all our supporters, patrons and fans. With only one weekend on stage, tickets will sell quickly! Get yours today!

Scrooge - The Musical is produced with permission from Samuel French. North Texas Performing Arts and Plano Children’s Theatre thank the City of Plano for their support of our programs.

There are very few people who could write the script, the music, and the lyrics to a successful production. The creator of Scrooge - The Musical is such a triple threat,  Leslie Bricusse. Mr. Bricusse is a double Oscar and Grammy winner who has contributed to many musicals and films throughout his career. A small sampling of his body of works includes: Stop the World – I Want to Get Off, Harvey, Goodbye Mr. Chips, Jekyll and Hyde, Victor/Victoria, and Willy Wonka and the Chocolate Factory.

In 1989 he received the Kennedy Award for consistent excellence in British songwriting. Bricusse has been inducted into the American Songwriters Hall of Fame. Unlike most playwrights who never touch a script once it’s been published, Bricusse continues to improve upon the Scrooge - The Musical script – much to the chagrin of returning actors!

Scrooge - The Musical is based on the Charles Dickens timeless story of A Christmas Carol. Born in 1812 in London, Charles Dicken’s often drew upon his own life for the grist of his novels.

In 1822, Dicken’s father was imprisoned because of his debt. Dicken’s mother pulled Dickens from school and sent him to work at the age of ten in a Blacking Factory which made shoe polish. For a while, Dickens was forced to live on the streets as his family moved into the prison to be with the Dicken’s father.

Eventually, Dickens returned to school and began his career working for a firm of solicitors. Dickens was known to be skilled mimic and gregarious personality. He started writing as a freelance reporter for law cases and then published his first short story in 1833, His national reputation grew when he published his Pickwick Papers. Next came Oliver Twist, Nicolas Nickleby. A Christmas Carol, the story that inspired Scrooge - The Musical, was written in 1843.