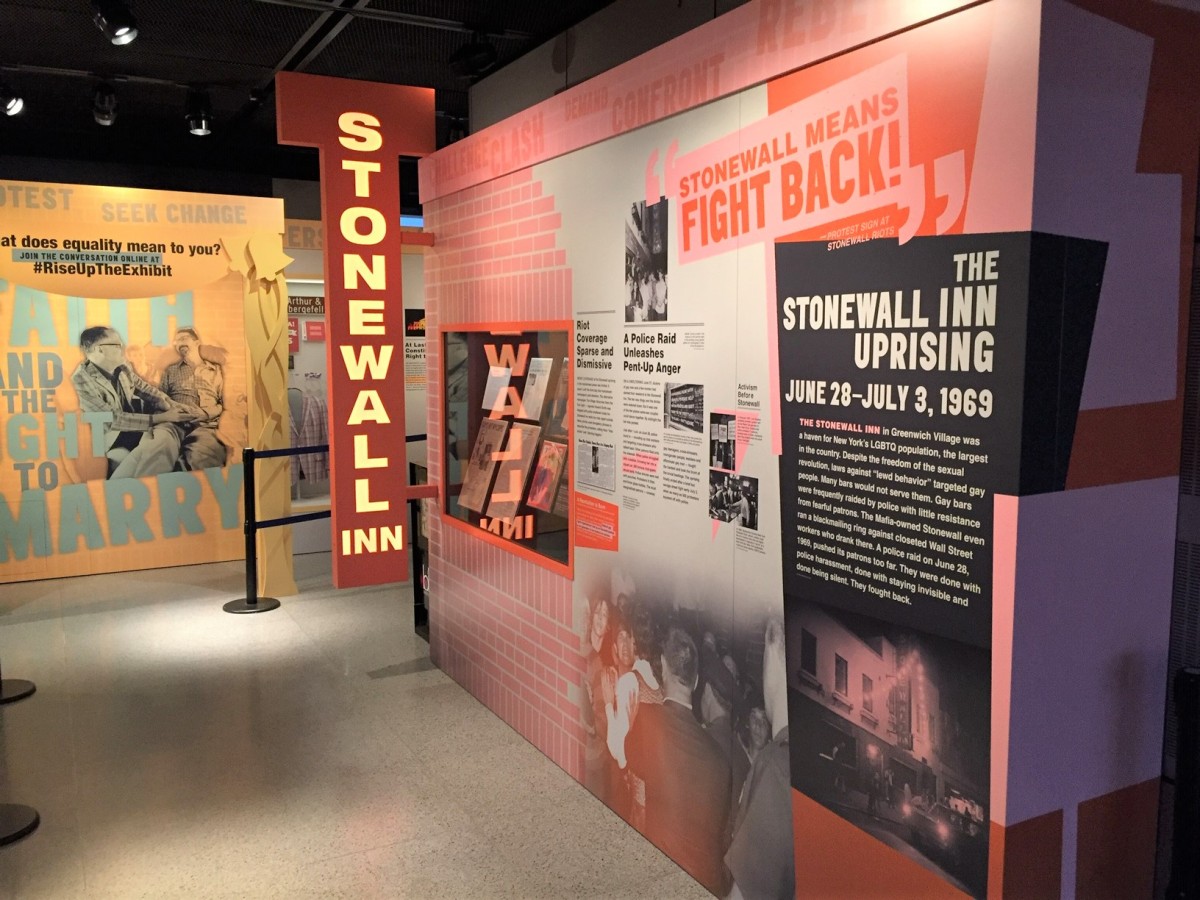 For six days in June 1969, following a police raid of popular Greenwich Village gay bar the Stonewall Inn, thousands of LGBTQ community members mobilized, protesting decades of discriminatory treatment and changing the landscape of the fight for LGBTQ rights in the United States. Celebrate the opening of Rise Up: Stonewall and the LGBTQ Rights Movement with a discussion on the events surrounding the Stonewall Uprising and the legacy of this revolutionary moment in the LGBTQ rights movement.

$10 per person | Free for Museum MembersIf you are a Museum Member, please log into the Member Portal here to access your free tickets. Contact dmcelroy@dhhrm.org with any questions.

The Museum does not offer refunds for purchased tickets.

About the Panelists: Karla Jay is Distinguished Professor Emerita of English, Women’s & Gender Studies, and Queer Studies at Pace University in New York City. She has written, edited, and translated ten books, the most recent of which is Tales of the Lavender Menace: A Memoir of Liberation. Her first anthology, Out of the Closets: Voices of Gay Liberation (co-edited by Allen Young in 1972) is still in print and was listed by Publishers Triangle as one of the one hundred most important gay and lesbian books ever published. She was an early member and first woman chair of the Gay Liberation Front, a member of Redstockings, and a founder of Radicalesbians, which staged the famous Lavender Menace takeover of the Second Congress to Unite Women. Karla has remained an activist for queer, feminist, and disability issues.Kevin Mumford is Professor of History at the University of Illinois at Urbana-Champaign. His publications include Not Straight, Not White: Black Gay Men From the March on Washington to the AIDS Crisis; Newark: A History of Race, Rights, and Riots in America; Interzones: Black/White Sex Districts in Chicago and New York in the Early Twentieth Century; and “The Trouble With Gay Rights: Race and the Politics of Sexual Orientation in Philadelphia, 1969-1982." He was a Fulbright Senior Scholar at Erfurt Universitait in 2011, was at the Warren Center for the Study of American History at Harvard University in 2008, and was a Schomburg Fellow with NYPL/NEH in 2005. He has received a number of publication awards, including the Stonewall Honor Prize from the American Library Association.Mark Segal is a social activist and author who participated in the Stonewall protests. He was a founding member of the Gay Liberation Front in New York and founder of Gay Youth, the nation’s first organization to deal with bullying and suicide of LGBT youth. Mark was also a marshal and member of the Christopher Street Gay Liberation Day Committee, which created the world’s first Gay Pride in 1970. He created a campaign to disrupt live TV shows in protest so that they would cover LGBT issues fairly. Almost 50 years after he disrupted NBC live broadcasts, today Mark serves on the Joint Diversity Council of Comcast NBC/Universal. His memoir, And Then I Danced: Traveling the road to LGBT Equality, was named best book by The National LGBT Journalists Association.About the ModeratorGary Sanchez serves as the Senior Director of Community Impact, Equity, and Public Affairs at VisitDallas. In this role, Gary is responsible for developing and fostering relationships with community partners, stakeholders, elected officials, chambers of commerce, state and national associations. His experience includes more than twelve years at the City of Dallas, including the Dallas Zoo, Office of Arts and Culture, and the office of the Mayor and City Council. Gary is currently the Chair of the North Texas LGBT Chamber of Commerce and serves on the board of directors at the Dallas Regional Chamber and 24HourDallas. In September 2021, he was appointed as Co-Chair of the Dallas Mayor’s Anti-Hate Advisory Council.About Rise Up: Stonewall and the LGBTQ Rights MovementRise Up: Stonewall and the LGBTQ Rights Movement, created to mark the 50th anniversary of a June 1969 police raid of the Stonewall Inn in New York's Greenwich Village, explores the modern LGBTQ rights movement in the United States. The protests that followed the raid were a pivotal moment in the modern gay liberation movement and the ongoing fight for LGBTQ civil rights.Rise Up highlights the events that led to the Stonewall Inn riots and how they energized the fight for LGBTQ rights. Through powerful artifacts, images, and historic publications, Rise Up describes key moments in LGBTQ history, including the 1978 assassination of Harvey Milk, one of the country’s first openly gay elected officials, the AIDS crisis, U.S. Rep. Barney Frank’s public coming out in 1987, the efforts to enact hate crime legislation, the implementation and later repeal of “Don’t Ask, Don’t Tell,” and the fight for marriage equality in the United States.

Rise Up: Stonewall and the LGBTQ Rights Movement was developed by the Freedom Forum, which fosters First Amendment freedoms for all.