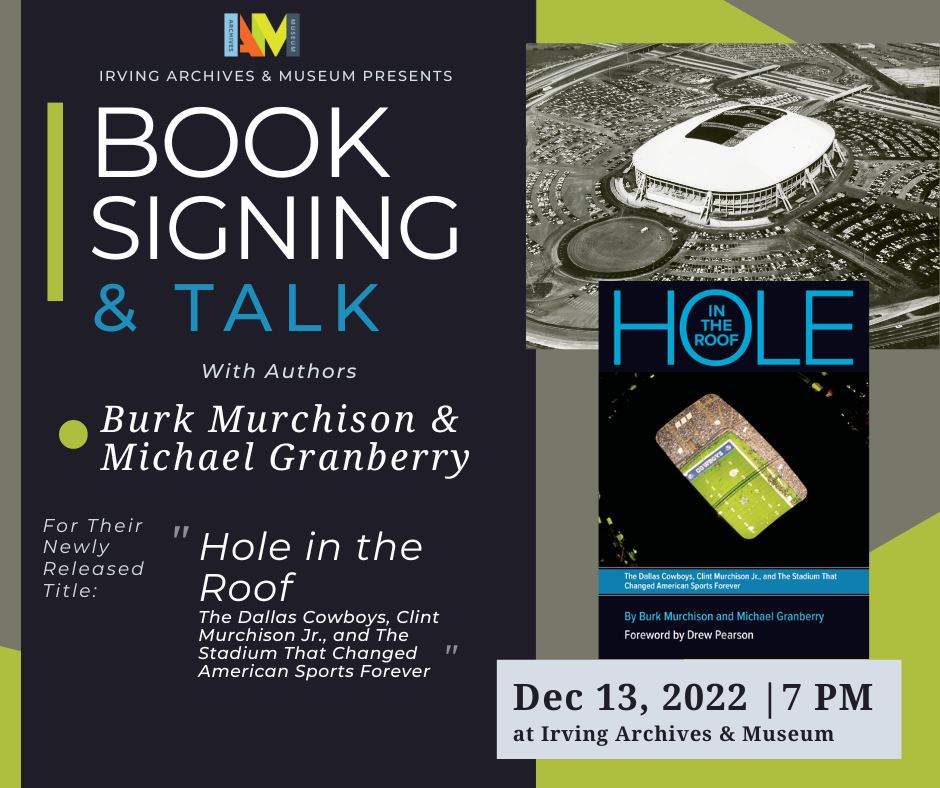 Hole in the Roof Book Signing and Author's Talk

"Hole in the Roof: The Dallas Cowboys, Clint Murchison Jr., and the Stadium That Changed American Sports Forever" by Burk Murchison, and Michael Granberry, with a foreword by Drew Pearson

Book Signing and Author's Talk with both authors!

This is a free event at the Irving Archives and Museum. Reservations for the event may be made online and books are available for purchase in advance via the website or can be purchased in person.

In 1966, when the still-young Dallas Cowboys franchise ended six years of agony with their first winning season, the team’s owner and founder, Clint Murchison Jr., son of a billionaire oilman, was feeling ambitious. He believed his team would be good, even special, for years to come. With such dreams dancing in his head, Murchison found that the aging Cotton Bowl in Dallas’s Fair Park was no longer a suitable home for what would soon be dubbed “America’s Team.”

Hole in the Roof: The Dallas Cowboys, Clint Murchison Jr., and the Stadium That Changed American Sports Forever tells the story of Texas Stadium, with its trademark hole in the roof, which served the Cowboys for 38 seasons without ever requiring a penny of public dollars. In 1966, though the Cotton Bowl was one of the newer stadiums in the National Football League, Murchison saw it as an outdated venue. What he envisioned was a shiny new stadium near downtown Dallas, but to realize his vision for what a professional sports venue could be—and the many benefits that the resulting revenue could generate—he needed buy-in from Dallas city leaders.

Hole in the Roof chronicles Murchison’s founding of an extraordinary sports franchise and the battles he fought to build the stadium he wanted. Along the way, this book provides not only a sweeping biography of Clint Jr., a history of the Cowboys from before their inception in 1960 until now (including Jerry Jones), and a history of Texas Stadium, but also a critical look at how Clint's original concept of the stadium has been corrupted—by greed and avarice.

Opening with a foreword by Drew Pearson, all-time Cowboy great and NFL Hall-of-Famer, and based on extensive research in both public and media archives and Murchison family records, Hole in the Roof contains the inside story of the iconic venue where the Cowboys went on to play each of their five Super Bowl-winning seasons: where Murchison proved that stadiums could be a source of revenue surpassing even television.