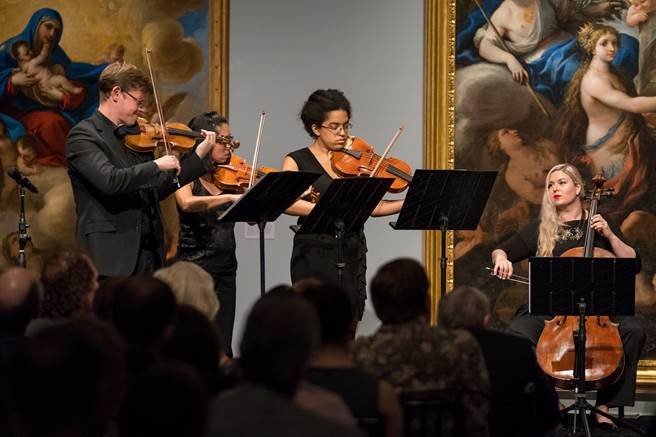 Sunday Afternoon Classical Series at Winnsboro Center for the Arts

September 11
Mercury Chamber Quartet
will be performing Mozart’s Eine Kleine Nachtmusik and other Mozart divertimentos. Mercury is a groundbreaking chamber ensemble that seeks to redefine the orchestra with performances that faithfully present the music of great composers in settings that make audience members an equal part of the experience – not simply a spectator.

Mercury was started by four friends in the year 2000 as an intimate chamber ensemble with the goal to enrich and entertain Houston audiences with an exciting repertoire of music performed on period instruments. What began as a grassroots effort over lunch at a local restaurant has blossomed into a lively chamber orchestra beloved by the community. In 2013, Mercury rebranded and expanded its repertoire to include works outside of the Baroque period. In this evolution, the goal remains the same. Their mission is to serve the community by celebrating the power of music through teaching, sharing, and performing with passion, intimacy, and excellence.

October 2
Axiom String Quartet will play a collection of classical tunes that have peasant or rural undertones. The individual players of Axiom have decades of combined experience performing internationally as soloists, chamber musicians, and in orchestral performances. The quartet serves as outreach ambassador for Chamber Music Houston. Axiom performs with the nationally recognized “Harmony in the Air” program and presents weekly concerts at Houston’s George Bush Intercontinental Airport. Recent major projects include the release of their first album Axioms - Moments of Truth, which was a commercial success and sold out within 24 hours of being released on Amazon, a tour of 12 concerts in 20 days throughout China in the summer of 2018, and a tour of the Midwest U.S. in the fall of 2019 where the group gave masterclasses and appeared as soloists with university orchestras in the region.