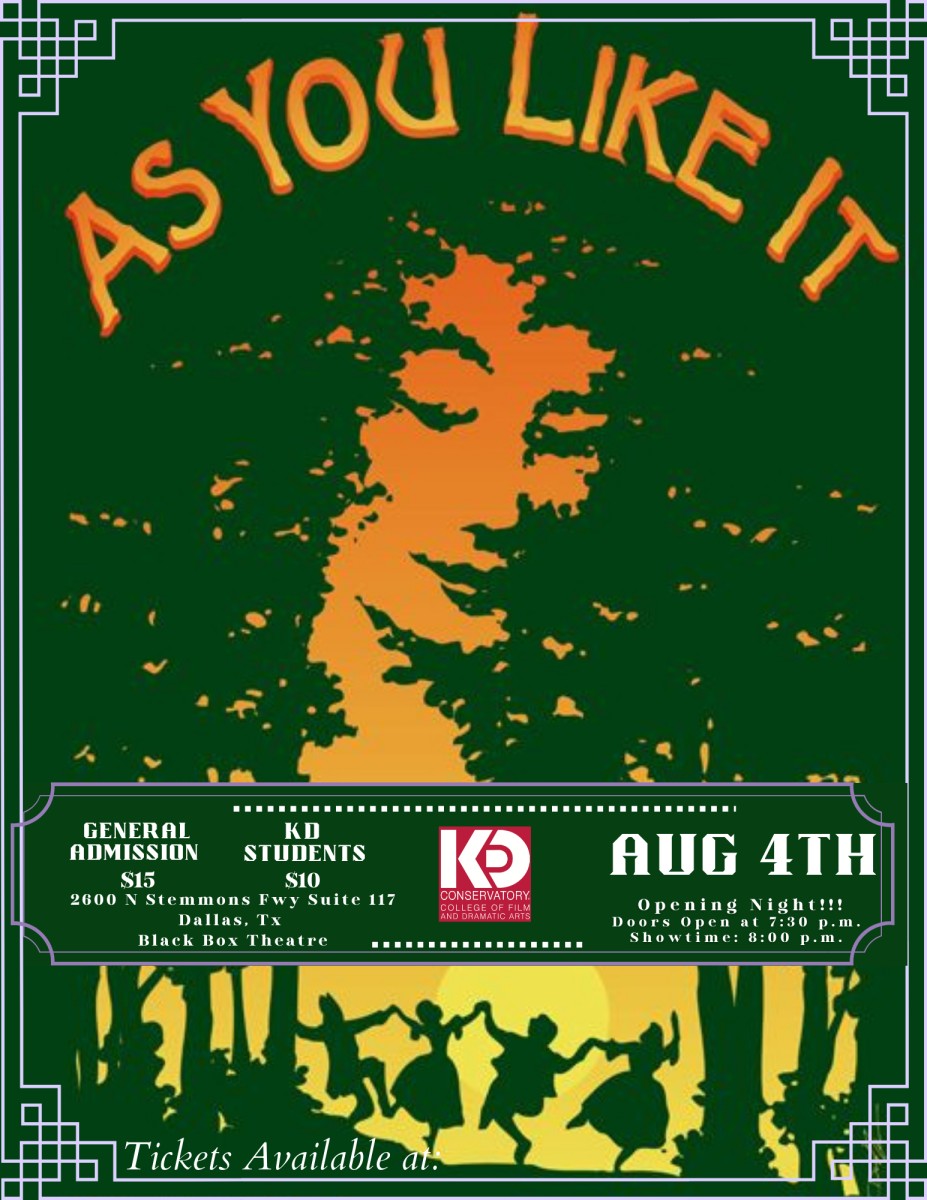 KD Conservatory (www.kdstudio.com) is proud to present its summer theatrical production As You Like It by William Shakespeare under the direction of KD Conservatory acting professor Sarah Rutan. The play opens Thursday, August 4, followed by performances August 5th and 6th, and August 11th through the 13th.  Show times are at 7:30 pm.

The play’s director, Sarah Rutan, is thrilled to be directing one of her favorite Shakespearean comedies and is even more excited to approach The Bard’s classic comedy (considered by many to be his best) with a performance style that predates Shakespeare himself by over a thousand years:

“I love the Art of Clowning. I love the fully embodied nature of the acting and the quickness to find forgiveness that comes from this style. I am excited to direct one of my favorite Shakespeare plays through this filter.”

“Clowning brings a whole new aspect to creating a character as it opens the gates to fully embodying the role. The story seems amplified with the new filter it is being put through. New experiences, new lessons, and even more fun to be had for the actors and the audience," said class of 2023 acting student Jaime Gonzales.

“As Jacques says in Act 2, ‘A Fool! A Fool! I saw a fool in the forest!’ What happens when a bunch of silly actors, find a bunch of silly characters and decide to put on a play,” asks director Rutan. “I hope theatre audiences of all ages will join us as we venture into the Forest of Arden —a magical place where anything is possible. One thing is for sure, Shakespeare provides enough love, laughter, risk, and reward in As You Like It to win over even the most reluctant Shakespeare fan.”

As You Like It is intended for audiences of all ages. Show dates and times are Thursday through Saturday, August 4, 5, and 6, 11, 12, and 13 at 7:30 pm. Performances are at the T.A. Taylor Theatre at KD Conservatory, 2600 N. Stemmons Freeway, #117 in Dallas, TX. Tickets are $15 for adults. $10 for students and children, and available at the box office on the nights of performance, online at brownpapertickets.com https://asyoulikeitatkdconservatory.brownpapertickets.com/ ,and by calling KD Conservatory at 214-638-0484.

Since 1979, KD Conservatory has been dedicated to the development of the nation’s future actors and filmmakers and to the creation of avenues into the professional world of entertainment. KD Conservatory has been rated “Exemplary” by the Texas Higher Education Coordinating Board and is accredited by the National Association of Schools of Theatre (NAST). For more information, visit http://www.kdstudio.com.