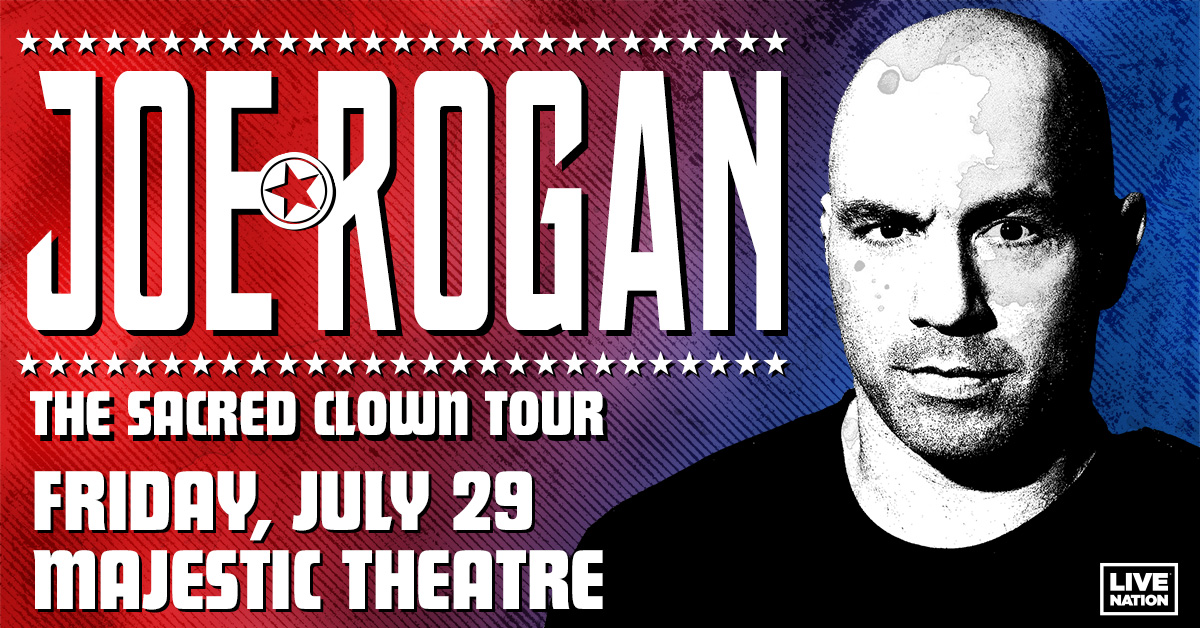 The Majestic welcomes Joe Rogan: The Sacred Clown Tour on Friday, July 29, 2022
doors:7:00pmshow: 8:00pm
Tickets on sale Friday, 6/10/22 at 10am local
Patrons will be required to have their phones locked up in YNDR pouches upon entry.
Bio:

Joe Rogan has been described as “One of the most complex and exciting stand-ups working in America today. Like an idealistic hippy stuck inside the body of a testosterone-pumped US marine. He’s been likened to late great US comedians such as Bill Hicks and Sam Kinison, but although he exhibits a similar brand of furious indignation, his observations and revelations are entirely his own. His angry, insightful act is an absorbing battle between his raw libertarian instincts and his refined liberal sensibilities.” –William Cook, The Guardian

Rogan is host of  The Joe Rogan Experience, a long-form conversation with guests that is one of the most popular podcasts, currently exclusively distributed on Spotify.

Since 2002, Rogan has provided color commentary for the UFC (Ultimate Fighting Championship) on Pay Per View, Spike Television, FOX, and currently ESPN+.  Rogan’s passion for MMA began with martial arts practice at the age of 13.  Within two years, the Boston native earned a black belt and soon became the Massachusetts full contact Tae Kwon Do champion four consecutive years.  By the age of 19, Rogan won the US Open Tae Kwon Do Championship and as lightweight champion went on to beat both the middle and heavyweight title-holders to obtain the Grand Championship.

Film credits include Here Comes The Boom (2012) and Zookeeper (2011).  Rogan hosted Joe Rogan Questions Everything (2013) for the SyFy channel.  Rogan hosted the competition reality series Fear Factor on NBC in 2011/12 and previously for six seasons on the network from 2001-2006.  Prior to Fear Factor, Rogan played Joe Garrelli, the resident electrician on the hit NBC comedy series NewsRadio.