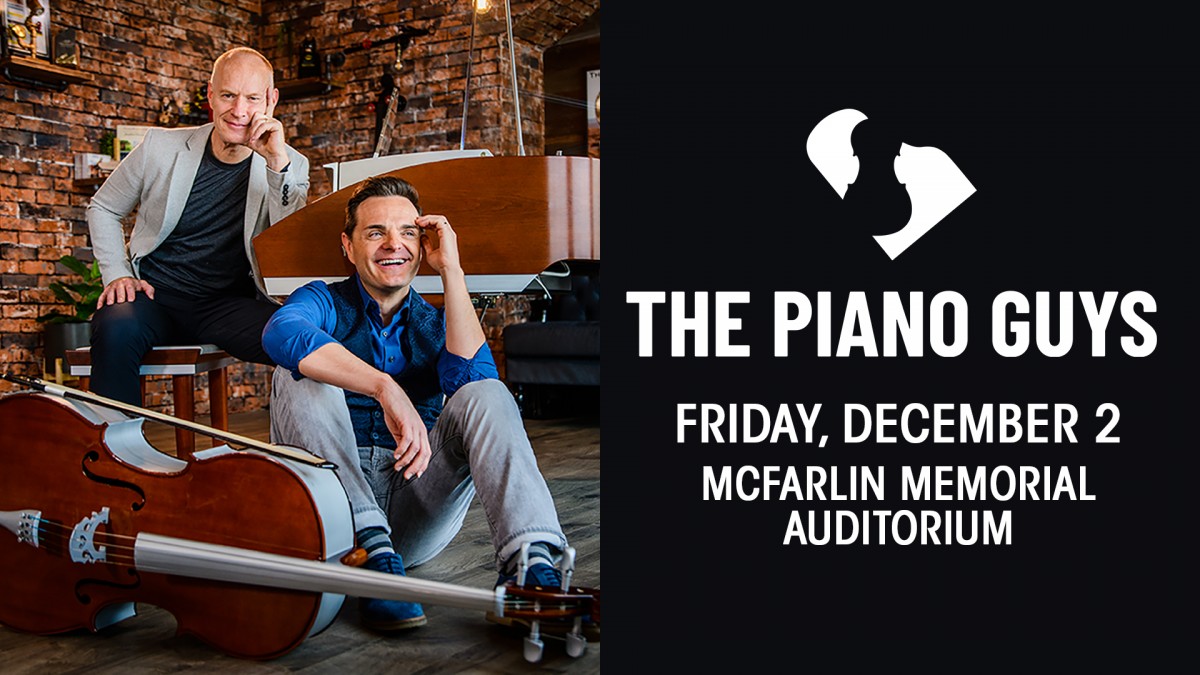 Since their serendipitous start in a Southern Utah piano shop, THE PIANO GUYS have proven to be a powerhouse group without limits. Arriving as a musical phenomenon seemingly overnight, the quartet of Jon Schmidt [pianist, songwriter], Steven Sharp Nelson [cellist, songwriter], Paul Anderson [producer, videographer], and Al van der Beek [music producer, songwriter] have delivered bold compositions that transcend boundaries of style and genre, a boundlessness that has since translated into a massively-successful career. With their 2018 release, The Piano Guys took their next step forward in an already impressive career that has proven to be nothing short of Limitless. And now Steven and Jon are gearing up to hit the road with their fantastic music and great humor.

“Who would have ever thought four middle-aged dads from Utah filming classically influenced music in nature could ever succeed at the outset?” asks member Steven Sharp Nelson. “That is why the name Limitless works so well. Our favorite thing is to find a way to be on the fringes of possibility. We like to combine things you would never expect to find together—but are close enough to make sense. It has been our mindset from the beginning.”

Since formally introducing themselves in 2011, The Piano Guys have released five studio albums, two Christmas releases and a fan-favorite live album, earning six No. 1 debuts on Billboard’s Top Classical Albums chart and garnering an impressive 2 billion-plus global streams, over 1.6 billion YouTube views, and averaging nearly 2 million monthly listeners on Spotify alone. They have sold out concerts in almost every corner of the world and attracted a diehard audience of millions. The Piano Guys have appeared in The New York Times, Fast Company, BuzzFeed, Mashable, People, been featured on CBS Sunday Morning and performed on the TODAY Show, Good Morning America and The Tonight Show.

In late 2017, they hunkered down at their own TPG Studios in Utah and commenced work on what would become Limitless. A sublime, soaring, and sweeping cover of Ed Sheeran’s “Perfect” teased out the forthcoming project, generating over 8 million Spotify streams and nearly 20 million YouTube views. Moreover, the crossover of The Chainsmokers’ “Something Just Like This” [feat. Coldplay] and Franz Liszt’s “Hungarian Rhapsody No. 2” further illustrated their signature penchant for masterful mash-ups.

Throughout the process, the music would live up to the name Limitless as they once again leapt past boundaries. “Often, highlights of a symphonic masterwork thrown into a piece of pop music or film score give people an invitation or a gateway to enjoy classical music,” Steven elaborates. “We like to tantalize their taste buds. If you consider pop music the sugar, we are putting greens into it and making a smoothie.”

That is exactly what they do on the “Swan Lake/In My Blood” mash-up. The musicians find a common ground between a recognizable movement of the Tchaikovsky ballet Swan Lake—a first for the band—and “In My Blood” by Shawn Mendes. The result merges the composer’s heightened drama and a transfixing pop melody carried by emotive strings and lush piano. “We had yet to employ the work of Tchaikovsky into one of our arrangements,” continues the cellist. “We also had not used much material from a ballet yet. It was fun to reach beyond those traditional limits of genre and composers. When we heard ‘In My Blood’, we loved the message. Every time Shawn feels like giving up, he sings, ‘It isn’t in my blood to give up.’ That is very much the story of Swan Lake too. The stories attached to each other fluidly.”

The four-piece charted new territory by reimagining two songs from Korean pop juggernaut BTS. For “DNA,” Steven simultaneously plays cello and speaks through a talk box in Korean, while Al serves up raps in the language. Meanwhile, they channel sentimentality through powerful piano chords in the evocative “Epiphany.” “The bonus is Al and I both spent time living in Korea, serving as missionaries at different times and in different places,” he goes on. “We learned the language and immersed ourselves in the culture. It is very special to be able to take a K-Pop song and turn it into an orchestral masterpiece.”

The album closes with an original from the group, “Miracles,” in which the four-piece teams with the Chinese Philharmonic Orchestra to bring their story of hope to the forefront. “We love throwing in new textures, so it has got electric cello” he adds. “Thematically, it is the moment where someone remembers the miracles they have experienced in their lives. That is our story. As children, we feel completely free. We have not had the limits of the world projected on us yet in youth. We have not been oppressed by the limits we place on ourselves about failure either. The whole album is a reminder that this innocence still exists within us, and we can do anything.”

In the end, Limitless shares an important message. “We hope this feeling of Limitless-ness transfers,” he leaves off. “As a mission of The Piano Guys, we hope we can be spokesmen of hope and faith. We want to make listeners feel like they can get up and conquer the world. We hope you become excited about what you can do!”