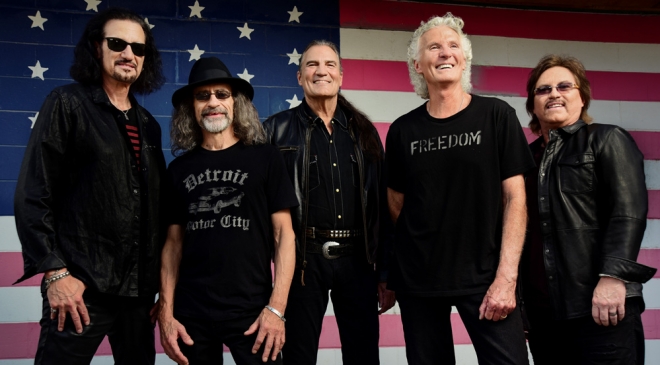 Grand Funk Railroad, known as “The American Band”, is a high-energy five-piece group that laid the groundwork for such bands as Foreigner, Journey, Van Halen and Bon Jovi with its signature hard driving sound, soulful vocals, muscular instrumentation, and forceful pop melodies. The fact that the band’s legacy still reigns over the Classic Rock landscape fifty years after its 1969 birth in Flint, Michigan is a testament to the group’s influence and staying power.

Over their career, Grand Funk has had 19 charted singles, eight Top 40 hits and two number one singles (We’re an American Band and Locomotion, both selling more than one million each). The group has now accumulated 13 gold and 10 platinum records with record sales in excess of 25 million copies sold worldwide. The most recent gold CD award was presented to the band for their greatest hits package Grand Funk Railroad the Collectors Series.

Jefferson Starship is an American rock band from San Francisco, California, formed in 1974. The group is one of the most successful arena rock groups of the 1970s and 80s, earning three platinum and eight gold records, as well as numerous Top 40 singles. Their top hits include mega-hit “Miracle”, “Nothing’s Gonna Stop Us Now”, “Find Your Way Back” and “Jane”.

The five road-conquering heroes that make up Jefferson Starship bring robust live performances with a massive setlist of hit after hit.