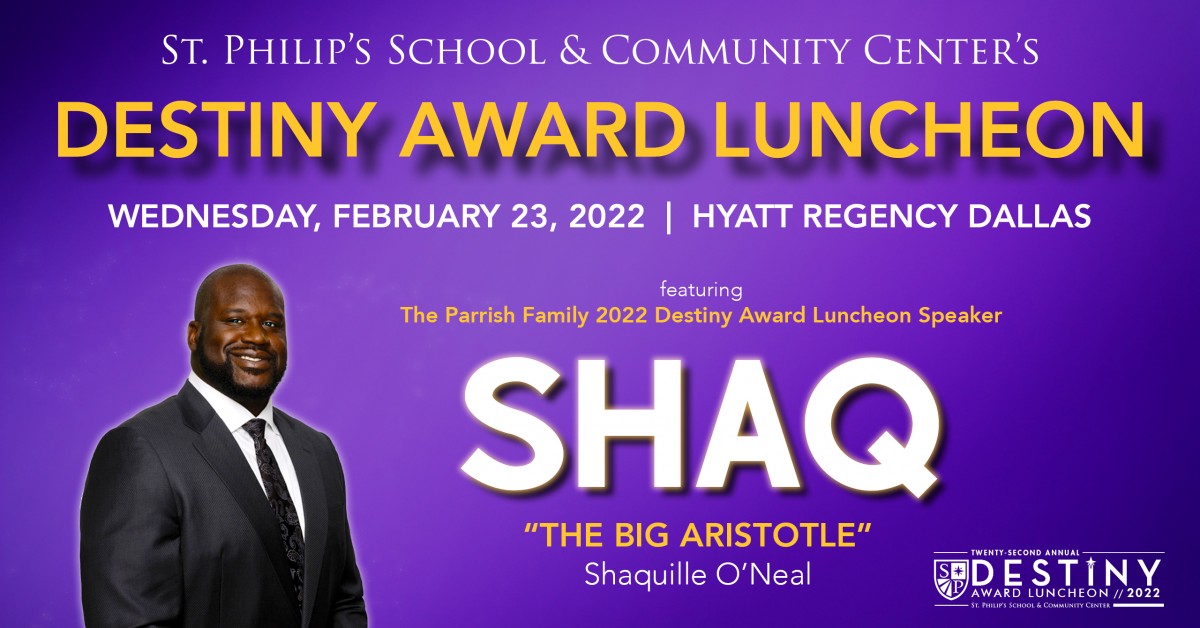 Join St. Philip’s School and Community Center for its 22nd Annual Destiny Award Luncheon, on Wednesday, February 23, 2022. This is the organization’s biggest fundraising event of the year, featuring a conversation with the Big Aristotle, Shaquille O’Neal, for some of the best pointers in this game called life. The student showcase will begin at 10:30 a.m., immediately followed by the luncheon at 11:30 a.m.

The 22nd annual Destiny Award luncheon is a celebration in conjunction with the close-out of St. Philip’s 75th anniversary. For the first time ever, The Destiny Award Luncheon will not be hosted on St. Philip’s growing campus, instead it will be held at the Hyatt Regency Dallas- Landmark Ballroom, allowing for more supporters to attend than in years past. This signature event has raised over $4 million to provide continuous support for the organization’s vital educational and social service programs. The Destiny luncheon has featured incredible scholars, athletes, and celebrities as keynote speakers and in moderated conversations.

St. Philip’s has the honor of bringing Four-time NBA Champion, 15-time NBA All Star, Three-time NBA Finals MVP and Entrepreneur, Shaquille O'Neal, as the Parrish Family Destiny Award Luncheon Speaker. Few individuals ever become iconic enough to be known by one name—Shaq. A revered cultural icon, Shaquille O’Neal is best known for an NBA career spanning nearly two decades and earning him the sport’s highest honors, including membership in the NBA Hall of Fame. NBA star has been named one of the most influential athletes by Forbes magazine, in addition to being the highest-ranked NBA athlete on Nielsen’s State of the Media: Year in Sports 2010 and Business Week’s Power Sports 100.

But Shaquille O’Neal isn’t only a legendary athlete; he has also established himself as a powerful media personality and businessman over the years. Ranked among ‘‘The 100 Most Creative People in Business’’ last year by Fast Company magazine, O’Neal is currently an NBA analyst on TNT’s Emmy-award-winning show, Inside the NBA on TNT.

In addition to being an early investor in companies such as Google, O’Neal has managed an increasingly robust personal brand, which has included television shows, a shoe line and social media/tech products.

St. Philip’s is blessed to have Pete Chilian as the 22nd Destiny Award Luncheon Chair. Pete is a Managing Director with J.P. Morgan Private Bank. Pete is a member of the Dallas Market Leadership Team, providing executive guidance to integrate J.P. Morgan’s lines of business. He has deep roots in the Dallas area, which enables him to play an active and visible role in expanding J.P. Morgan’s presence in the community.

The Destiny Award has been given to 59 local organizations and individuals for their leadership and work bridging relationships between diverse communities. Dr. Bobby Lyle will receive the 2022 Mona & David Munson Humanitarian Award in recognition of his philanthropic work in education, community involvement, business leadership, and the great works underway throughout St. Philip’s.

Mark Copeland serves as the Underwriting Chair. Mark is a trustee of St. Philip’s and serves as the Strategy and Transactions (SaT) Managing Partner for the US-West Region for EY (Ernst & Young). The Honorary Chairs are Rebecca and Rob Landin, who are actively engaged in multiple local DFW non-profit organizations and are passionate about health and wellness, education, mental health, domestic violence, women’s issues, human rights, animal welfare and youth sports.