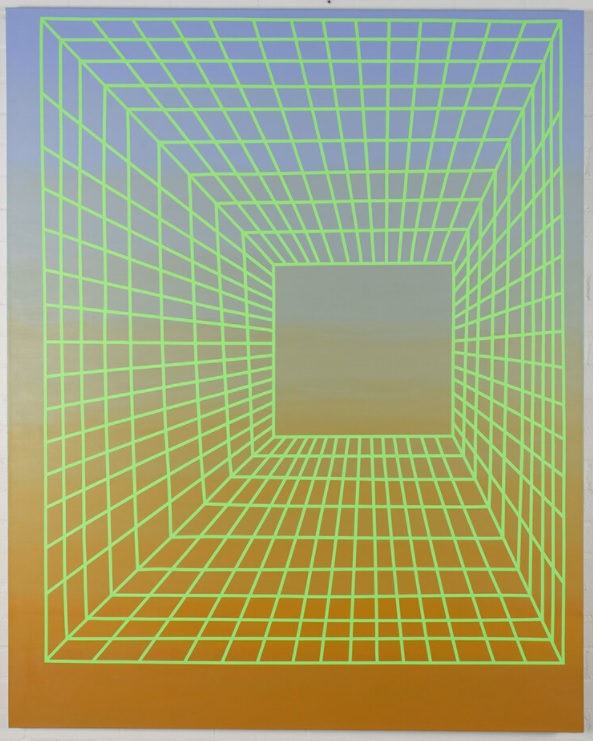 The Oak Cliff Cultural Center is pleased to present Jessica Baldivieso’s solo exhibition Subtle Changes opening on Saturday, January 29 with a reception from 6 – 8 pm. On view from January 29 – February 25, 2022

Baldivieso is a painter based in Dallas, TX and Santa Cruz, Bolivia.  Subtle Changes will feature her current body of work focusing on the use of receding line, gradated color, and scale to explore spatial experiences inside and outside the canvas. Jessica will also debut a new immersive painting installation inspired by the Catedral Metropolitana Basilica in her hometown of Santa Cruz de la Sierra, Bolivia.

With a background in architecture and an interest in the power of spatial experience, Baldivieso utilizes skillfully rendered line in her paintings to “direct the viewer towards a path” and draw them into the compositional space.  Canvases charged with vibrant and gradated color combined with her receding line create movement and suggest temporality while others rendered only in white “let the viewer focus on shadows, texture and the subtleties of the brush stroke”.  Large-scale works seek to establish a “corporal relationship” with the viewer and envelop them in the space while smaller works express her interest in the relationship between the canvas and the frame. Each of the paintings in Subtle Changes encourage contemplation of experiential spatial relationships between the viewer, the canvas, and the space that holds both.

Jessica Baldivieso was born in Santa Cruz, Bolivia. She received both a BS in Architecture (2014) and a BA in Art Studio (2016) from the University of Arkansas. She had her first solo exhibition at MAC Museo de Arte Contemporaneo, Santa Cruz, Bolivia in 2019. Her work was selected to be part of the 21st International Visual Arts Biennial, Santa Cruz de la Sierra, Bolivia, 2020. Jessica is a studio artist in Dallas, Texas and recently completed a one-year residency at Cedars Union in Dallas, TX.