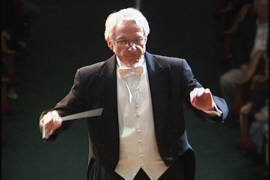 Adron Ming, Music Director and Conductor, and Charles Andersen, Assistant Conductor, will perform Richard Wagner’s “Siegfried Idyll,” Sergei Prokofiev’s “Overture on Hebrew Themes,” and Aaron Copland’s “Appalachian Spring Suite” on Friday, November 5, at 7:30 pm, at the Lewisville Grand Theater in Old Town Lewisville as part of the Lewisville Lake Symphony’s 38th season serving North Texas audiences. Wagner composed the “Siegfried Idyll” as a birthday present to his wife Cosima after the birth of their first and only son, Siegfried, in 1869. Prokofiev wrote “Overture on Hebrew Themes” to fulfill a request by the Jewish ensemble Zimro, who toured the United States in 1919 to much acclaim. Copland’s “Appalachian Spring Suite” was written for dancer and choreographer Martha Graham and won the Pulitzer Prize for music in 1945. Tickets, more information about the concert, and safety protocols are at www.LewisvilleSymphony.org.