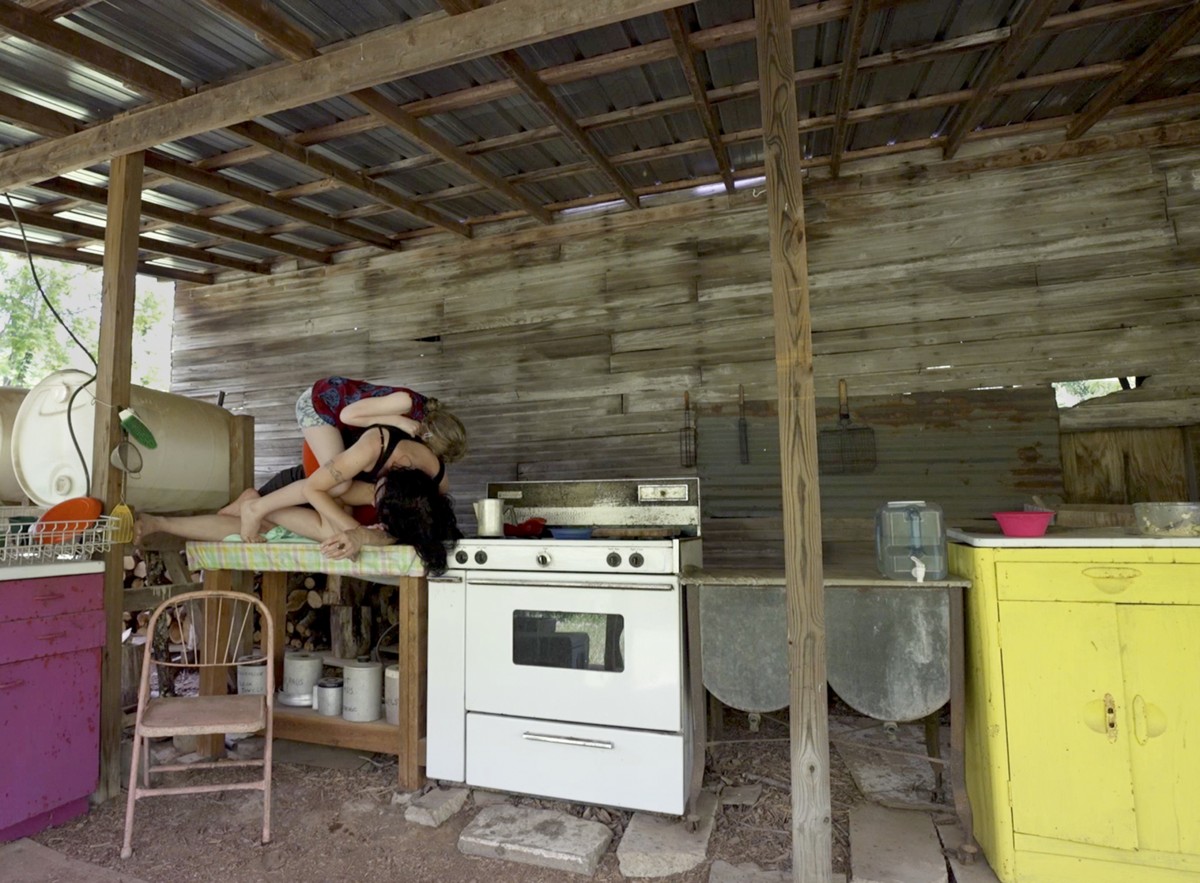 As partners and collaborators, Dani + Sheilah ReStack make video and photographic installations that explore connections between the domestic and the feral in contemporary life. Their approach weaves together real and mythical understandings of family, intimacy, place, desire and ritual. They often employ aspects of social practice and performance as a means to examine queerness, site-specific histories and human-animal relationships.

Stack for Martha’s Sisters is a queer feminist imagining of alternative spaces of being, family and creation. The video installation is intended as a portal of fragmented imagination – through contemplation of past women’s communities, and channeling a horizontal possibility of influence, history and making. The Sanctified Sisters of Belton, Texas was founded by Martha McWhirter in the late 1860s after she had a dream in the kitchen of separating from her husband and making community with women similarly interested. The history of the Sanctified Sisters infuses the installation at Fort Worth Contemporary Arts as the artists used this historical legend, which exists without physical trace except for a plaque in the town of Belton, as inspiration.

The artists returned to their home state of Ohio and visited the Susan B Anthony Womyns Land in Athens, Ohio. The Susan B. Anthony Land was founded in the 1970’s and continues to serve a queer population interested in living or camping rurally. The filming for Stack for Martha’s Sisters occurred in the outdoor kitchen and Star cabin at the Susan B. Anthony Memorial Land (Subamuh) in summer of 2021. The artists, Dani + Sheilah, and their children are part of the creation and interaction with the space of stacking, feral domestic possibility and alternative queer family collaboration.

Alongside Stack for Martha’s Sisters the artists also present Shameless Light at Fort Worth Contemporary Arts. This is an ongoing project where invited queer identified participants submit love letters that are then read aloud under two red, neon funnels. At TCU, the artists are hosting an open call for love letters by queer identified people to be included in an anniversary publication of the project in 2022. Letters can be submitted by email to the artists directly ([email protected]) or through The Art Galleries at TCU ([email protected]). Alternatively, letter writers are invited to submit hardcopies in person to staff at Fort Worth Contemporary Arts.