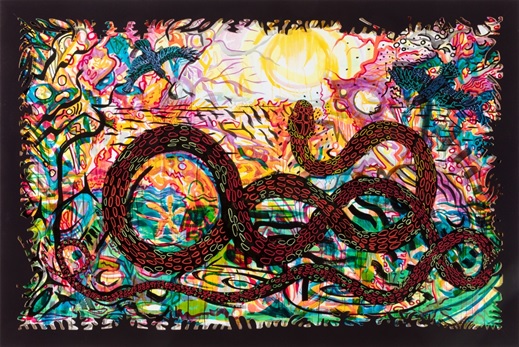 Artspace111 presents Swallow the Frog, the first solo exhibition of works by Jules Buck Jones in Fort Worth. In Swallow the Frog, Jones presents a wide range of drawings and paintings expanding on the artist’s interests and concerns with the natural world. The exhibit will showcase monumental works on paper like Serpent of Summer, where Jones employs his heavily stylized use of watercolor, ink and pastel to create a scene writhing with motion and light.

Other works in the show pivot away from the loud and expressive as in “Eye In The Sky”, a softer, quieter graphite drawing of ancient and modern amphibians alongside the moon, which operates as a study in textures while highlighting leaps in biological evolution. More still, he’ll be showing several large-shaped wood panels like “It’s Hard To Forget What You Don’t Know” and “Swallow The Frog” where Jones relies on the hard edge of his panel to be the descriptive driver of the work, allowing his use of paints and pastels to embrace a more suggestive role. In this exhibit Jones reveals a multifaceted relationship to drawing, one where deliberate, descriptive modes inhabit the same space as the bold and expressive. The range of styles, reflects the artist’s goal to create work that is both celebratory and mournful, straddles fact and fiction, and explores hope, excitement, and despair.