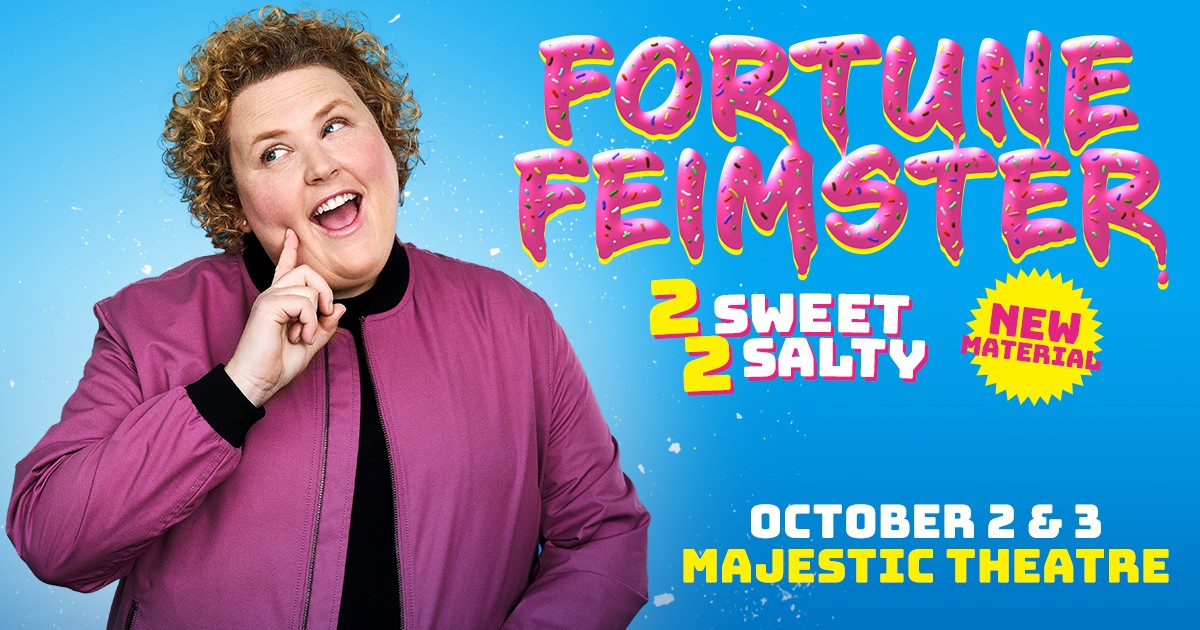 Fortune Feimster is BACK at the Majestic with her "2 Sweet 2 Salty" tour!

MASKS are highly encouraged, but not mandatory.

If you purchased the original tickets for the EARLY 6:30/8:00pm show back on the original date -- then YOUR SHOW is the October 2nd show.

If you purchased the original tickets for the LATE 9:30/10:30pm show -- back on the original date -- then YOUR SHOW will be the October 3rd show.

If you attend on the wrong date, you will NOT be allowed to enter as that show's seats are assigned to another ticket holder. The Saturday show is almost sold out so there will not be any extra seats to exchange with Sunday tickets.

Bio: Stand-up comedian, writer, and actor, Fortune Feimster, is one of the busiest women working today. She first became known as a writer and panelist on E's hit show Chelsea Lately, and then starred as a series regular on The Mindy Project for Hulu and Champions for NBC. She has gone on to have many guest appearances on TV shows including Claws, 2 Broke Girls, Workaholics, Glee, Dear White People, and Tales of the City, as well as recurring roles on Showtime's The L Word: Generation Q and CBS's Life In Pieces.

She's had memorable roles in the movies Office Christmas Party, Social Animals, and Father of the Year. She also recently voiced the role of Evelyn on The Simpsons, she's the voice of Brenda on Bless the Harts for Fox, and she voices Ava on Summer Camp Island for the Cartoon Network.

When not acting, Fortune tours the world doing standup. She most recently released a one-hour special on Netflix called "Sweet & Salty," which has been met with great critical acclaim. She's done late night TV sets on Conan and Late Night with Seth Meyers, and she has half hour specials on Comedy Central and as part of Netflix's season one of The Standups.

As a writer, Fortune has teamed up with some of the industry's greatest. She created and starred in the Tina Fey produced pilot Family Fortune for ABC. Additionally, Steven Spielberg's production company, Amblin, recently acquired two features Fortune wrote, Bad Cop, Bad Cop and Field Trip, both of which she is attached to star.

Fortune can currently be heard every morning on Sirius XM's channel 93 for Netflix with Tom Papa. On their show, What A Joke with Papa and Fortune, they interview tons of comics and talk all things comedy. She also hosts a weekly podcast with her partner, Jax, called Sincerely Fortune. She can be seen on a regular basis on David Spade's nightly Comedy Central show Lights Out, and she pops up on Ru Paul's Drag Race as a guest judge from time to time.