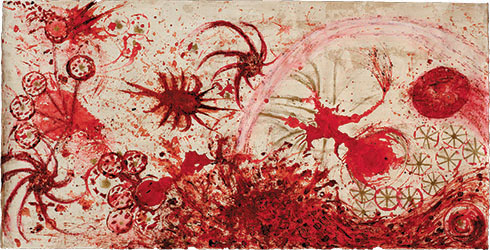 In Chaos and Mayhem: Charmaine Locke and James Surls, presented by Kirk Hopper Fine Art, we enter a realm where shifts, ruptures and irreparable fissures are part of the natural flow. Order and stasis, the work tells us, are illusions. Decay, aggression and anarchy are part of the process to which we all must submit if we are to have any understanding of where and how we exist in time. Walking around, engaging with the sculptures, drawings and prints can induce vertigo. It's as if we've been through some kind of maelstrom and have yet to reach a state of calm.

Locke's life-size sculpture UnHoly Warrior: Blood Feud is a blue-eyed, crimson demon that lunges at us with sword and cross. Its back is riddled with cone-like extrusions as sharp as ice picks. Surls's Cock Fight, a 10-foot preening rooster of gnarly, rippling oak suspended from the ceiling, slams the senses with knife-edged, bulbous and phallic shapes. It soars through the space as if fueled by poisonous testosterone.

Scarred souls. Psychic wounds. Locke and Surls unleash human feeling, thereby making public our fears and insecurities, our sexuality and desire. Every work is an arena for survival; we imagine a person either desperate to live or eager to kill. Both sculptures stake out their territories like two beasts circling one another.

Surls manifests the body in all its vulnerable, disarticulated, morbid aspects, in its apertures, curves, protuberances, where the boundaries between self and world are porous. He sustains the belief in sculpture as a metaphor for the body, a repository for the touch of the hand. It is a presence that relates physically and intuitively to viewers—the skin-like texture of wood that we experience sensually, as with another being. His Falling Steeple with Double Cross conveys a skeptical, potentially sardonic edge about the betrayal of religious teachings and marketing of souls.

Throughout Chaos and Mayhem are whiffs of 21st century America's spooky disorders. Both artists portray the flow of forces colliding, separating, splitting apart and jostling together. The direction is toward perdition. Gentle humor about life's trivial ironies becomes a thrust to the vitals. "We all have a gyroscopic axis running through us, giving us the ability to stay in balance; but all things at their core have a duality at play," Surls writes. "The center is not still; it moves at unseeable speeds, causing friction that produces heat."

Both artists seek to engage our minds and spirits, to bring us to a state of awareness that will permit no evasion. Their art is used as the weapon to face down and gain power over the circumstances that seem out of control. For Locke, the fear of chaos has impelled humans to ever more destructive acts of self-preservation. Her epic cycle of blood-red, pulsing narratives on rice paper convey the frustration of helplessness and futility before ominous, sinister and malicious powers. The Un-Holy War, The Un-Civil War, The Whitewashing of Truth, The Fallen Ones summon forth the darker aspects of the human condition—war, pestilence and personal turmoil. "My intention with the work is to sound alert, sound the alarm," says Locke. "The spark of life is the greatest mystery, along with the ever present malevolent drive for destruction, bringing misery as a consequence, the human toll of civil strife and wars."

There is no doubt that the explosive energy in her works—deluges, cyclone-like funnels, agitated brushstrokes and diaphanous spatters, hemorrhages and aneurysms—reflect upon a mood of anxiety, of clashes and turbulent moments in history, of current political and social concerns. Wild tangles of line sweep us up in electrifying vortexes of gestural energy. Hot-blooded and sensual, the work has an emotional intensity that ranges from deep melancholy to painful discordance to ecstatic jubilation. Locke is a nervy risk-taker who penetrates deep to reveal the pulse of a constantly changing, contingent world. She builds a complex matrix through an obsessive crafting that is highly additive and densely layered. Locke's violent, broad brushstrokes alternate with finer ones, resulting in an intricate system of gestural painterliness that hovers between the transgressive and the sublime. The sinuous movements of the brush are inward and almost savage, touching off in us a raw wound of a deeper longing. Locke doesn't flinch from any double meaning the flesh can be made to bear.

Chaos and Mayhem includes some 11 large-scale works from Locke's "Anti-War" series and eight major sculptures by Surls, in addition to select "Table Top" drawings, as well as six prints from the "Houston Suite." It addresses the core issues facing us in the here and now about war: between races, countries, religions, the sexes and our own bodies, the private and the public. Miraculous creation and utter annihilation thus come together in strikingly beautiful, yet sinister forms. They evoke a sense of the mythic and ancient, from visible nature to the inner eye. The works deal with the darkest aspects of humankind, reacting to the arrogance, hostility and complacency which closes in from all sides.

For Locke and Surls, the world is filled with wonder, but it is a world also filled with real desire, real death. It is this intensity that brings forth a truth in expression that can jolt us one moment and infiltrate our own sense of being the next.

Significantly, James Surls and Charmaine Locke have been partners in life for over 45 years, since meeting at SMU where Surls was a professor of sculpture and Locke was a senior student of psychology and sociology. KHFA's Chaos and Mayhem is their first exhibition together in Dallas.