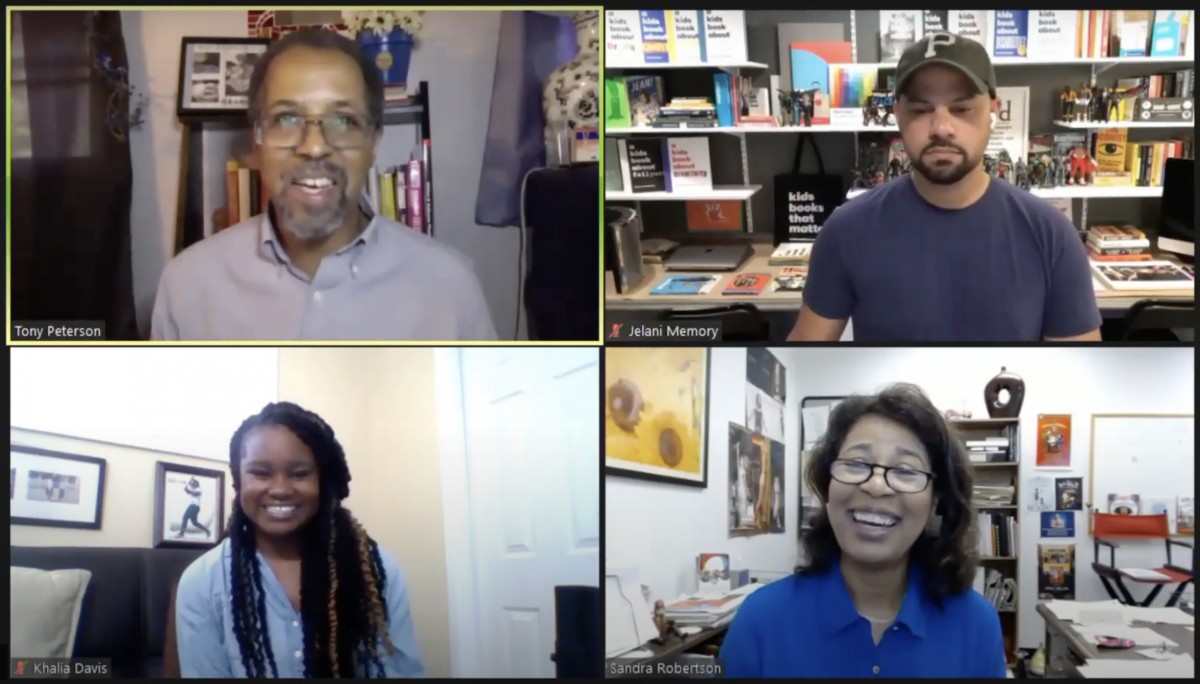 For those who missed the Lunch & Learn Talkback hosted by Dallas Children’s Theater and longtime partners Texas Instruments along with Capital One on August 7th, the entire talkback is available as a resource for families at dct.org/akidsplay. It can also be found here via YouTube.

For families looking for meaningful ways to talk with children about race and racism, but are uncertain on where to begin, this recorded virtual event provides guidance and suggestions, as well as a reading list for further engagement. Created on the heels of the world premiere of a new virtual production entitled, A KIDS PLAY ABOUT RACISM, this event featured national cultural competence researcher and educator, Anthony Peterson, as well as Jelani Memory, author of A Kids Book about Racism, and Play Adaptor and Director, Khalia Davis. Families were encouraged to listen in on the conversation and pose questions online. This must-see conversation is now available for all parents and families that were to watch at their leisure.

DCT host and project coordinator, Sandra Session-Robertson, believes all parents would benefit from taking time to watch the exchange.  “Our three guest speakers did a beautiful job of laying out why it is important for us to talk to children about racism. I was particularly struck by the comment that if children don’t know what it is, they won’t know how to speak out about it when it is thrust in front of them.”  Session-Robertson added, “If you take a minute to watch it, any parent will clearly understand how all of us play a role in wiping out behaviors early that lead to racism.  I hope people will take advantage of this opportunity to watch it in the comfort of their own home, whenever they want.”

A KIDS PLAY ABOUT RACISM was available free via Broadway on Demand through August 7th in a collaboration that involved 41 family-focused theaters in the country. Due to popular demand, the 30-minute play streamed in an extended run.  It will likely be available again later this year, but details will be forthcoming.  Kids have said “It was super good!” and “I just really liked the play and I think it describes racism in a real honest way,” and “I like the music!”

In addition to Texas Instruments and Capital One, funding to make this effort possible in Dallas was also provided by The Melinda and Jim Johnson Family Fund and Deborah and Craig Sutton.

About Jelani Memory: Jelani is a Husband, Father + co-founder of A Kids Book About, and a software company called Circle. He intentionally puts his energy and love into that exact priority order in his Twitter bio. At 17 years old, Jelani should have been on top of the world. He was the most popular kid in his high school, a star athlete in basketball and soccer and his grades were stellar. Yet, he was deeply depressed and realized that there must be something external — bigger than him — that could give life meaning + joy. From there, purpose has been at the center of Jelani’s life and ultimately led him to start a software company called Circle and an amazing publishing company called A Kids Book About.

Jelani is a black man married to a white woman and they have a blended family of 6 kids and the topic of race comes up often in life and in conversation with the kids, so Jelani wrote a straight-forward book about it called “A Kids Book About Racism.” That book sparked conversation and interest from all of his adult friends because it gave kids and adults permission to talk about such a difficult topic. What started as a small project is now a series of a dozen books around racism, feminism, body image, cancer, belonging, gratitude, and launching 30 new books every year!

About Tony Peterson: Anthony Peterson has lived, studied, written about, and taught about cultural, racial and other diversity realities throughout his life. Anthony has designed and facilitated diversity workshops since 2004. He has led workshops in corporate, academic, and community settings. His degrees in psychology (B.A., Willamette University) and religious education (M.A., Scarritt Graduate School). inform his perspective. Anthony’s diversity discussions took a personal turn in 2014, when he began documenting conversations with his white grandchildren regarding race. His relevant TEDx Talk can be accessed at https://youtu.be/u5GCetbP7Fg. He hopes that those conversations serve as an invitation for others to tell their own racial stories. Anthony is Senior Consultant and Facilitator for people3, a diversity, equity, and inclusion agency. He is pursuing a post-Master’s Specialist of Education degree in Culture, Cognition and Learning Process. He is a contributor to Rhetoric, Race and Religion, and he blogs at AnthonyPetersonSpeaks.com.