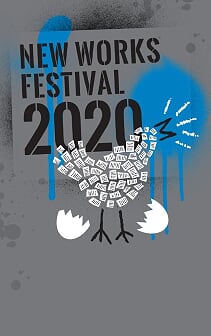 New Works Festival 2020 – VIRTUAL READING SERIES are FREE, one-time events and will be live-streamed over the Zoom platform. Virtual readings are performed over the course of 3 weekends: June 12 & 14, June 19 & 21 and June 26 & 28. The readings will occur on Fridays at 7pm and Sundays at 2pm. Each virtual reading is followed by a moderated panel discussion focused on the unique process of developing and creating new work, possibly involving the playwright. To join the virtual performances, audience members must RSVP in advance at kitchendogtheater.org Patrons will then be emailed their virtual access link prior to the performance. More information about the Festival can be found by visiting www.kitchendogtheater.org.

Kitchen Dog Theater (KDT), a founding core member of the National New Play Network (NNPN), is thrilled to announce the official lineup for the twenty-second anniversary of its annual New Works Festival (NWF). This year’s NWF will be completely digital due to the ongoing COVID-19 pandemic. To celebrate this landmark event, KDT is offering a series of six virtual readings as well as the 19th year of PUP (Playwrights Under Progress) Fest. Showcasing some of the newest and most exciting voices and visions in contemporary theater, the winning plays are selected from almost 500 annual submissions from around the globe and will feature a strong cadre of DFW's most accomplished actors and directors.

THREE YEAR SUMMER by Amy Berryman
Friday, June 12 at 7pm -
Set in 2002, while awaiting the release of the fourth Harry Potter book, thirteen-year-old Tommie takes refuge in the deep, dark world of online fan fiction as her parents' marriage falls apart around her. A magical coming-of-age story about fandom, betrayal, and family.
Director: Carson McCain

PALETAS DE COCO by Franky Gonzalez – *WINNER - 2020 LOCAL SLOT*
Sunday, June 14 at 2pm - *Playwright to perform in reading*
A playwright searching for his father and for someone to read aloud a letter he's written recruits a Performer who, along with the audience, are taken with the playwright on a journey through four Christmas Eves, coconut popsicles, depression, Santería ritual, Times Square, male breastfeeding, reunions with long-lost siblings, Applebee's Nacho Plates, childbirth, suicide attempts, fatherhood, and robbing Chinese buffets.
Director: Dominic D’Andrea

DREAM HOU$E by Eliana Pipes
Friday, June 19 at 7pm
Two Latinx sisters seize an opportunity to capitalize on their “changing neighborhood” by appearing on an HGTV-style reality show, unprepared for the show’s surreal left-turn through ancestry, capitalism and identity. What’s the cultural cost of progress in America — and is cashing in always selling out?
Director: Morgana Wilborn

THRIVE, OR WHAT YOU WILL by LM Feldman
Sunday, June 21 at 2pm
Jeanne Baret, a gifted 18th-century herb woman, falls for a university-trained botanist. Concealed as a man, she joins him on a sea voyage that will change science forever. An epically true tale of historical fiction about the first woman to travel the globe. THRIVE, OR WHAT YOU WILL is one of American Shakespeare Center's Shakespeare's New Contemporaries with a production slated for 2021.
Director: Emily Ernst

THE AMPHIBIANS by Dan Caffrey *WINNER - 2020 UNIVERSITY OF TEXAS MFA SLOT*
Friday, June 26 at 7pm
Set thirteen years in the future, THE AMPHIBIANS takes place in west-central Florida shortly after we've passed the point of no return in the fight against climate change. When two high schoolers unearth a wondrous discovery in the woods, they learn hard lessons about the evolution of friendship and what it means to take care of something at the end of the world.
Director: Libby Hawkins

LAST SHIP TO PROXIMA CENTAURI by Greg Lam
Sunday, June 28 at 2pm
The Earth has become uninhabitable. The last escape ship from Earth (Seattle, to be exact) arrives to their new home centuries after all the others. They are not prepared for what they find there: A planet full of unimpressed people of color who are not happy to see them.
Director: Christie Vela