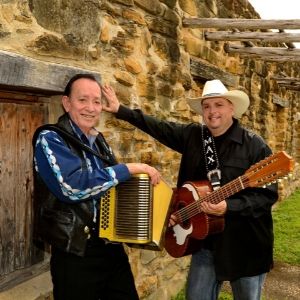 Los Texamaniacs is quick to point out that Cruzando Borders, the band’s third album for Smithsonian Folkways, is more than music; it was crafted to send a message. Prompted by negative public rhetoric about the U.S.–Mexican border and Mexican culture, and inspired by the transcendent brotherhood and exquisite beauty of the border life they have experienced, Los Texmaniacs have created an album that asserts pride in both their native Mexican culture and U.S. nationhood. The recording features all-star guest appearances from country legends Lyle Lovett and Rick Treviño, is a “vital heartbeat for a group of folks who truly have one foot on either side of the border” (NPR Music), and was nominated for the “Best Regional Mexican Music Album (Including Tejano)” Grammy award.

Los TexManiacs are honored to perform with legendary five-time Grammy-winning artist, Flaco Jiménez, whose six-decade career has taken his accordion-fueled TexMex sound to a larger audience than any other conjunto or Tejano artist.