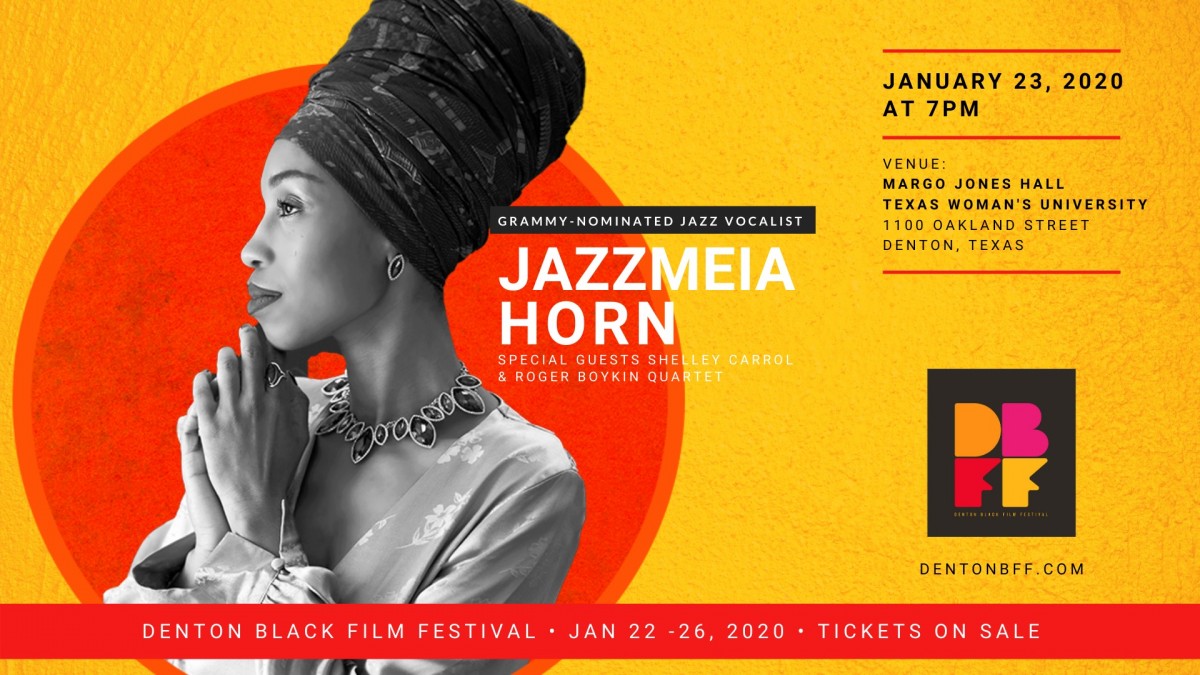 An Evening with Jazzmeia Horn

The Denton Black Film Festival opens its sixth year with a concert by international Jazz artist, Jazzmeia Horn on Thursday, January 23, 2020, at 7 pm. The concert will be at the newly renovated Margo Jones Hall on the campus of Texas Woman’s University.

This will be one of the hottest Jazz shows to hit Denton in years and you can see it up close and personal.  Also on the bill will be opening act Shelley Carrol Quartet featuring Roger Boykin. The New York-based performer, Jazzmeia Horn, is a gifted jazz vocalist with an inventive, scat-influenced style that helped her win both the 2013 Sarah Vaughan International Jazz Competition and 2015 Thelonious Monk International Vocal Jazz Competition. Following her Monk win, she released her Grammy-nominated 2017 debut album A Social Call.

Born in Dallas, Texas in 1991, Horn grew up in a creative, spiritually-minded family and was first introduced to singing by her grandmother, a gospel pianist with an abiding love of jazz. Although she sang from an early age, it wasn't until her teens and attending Dallas' Booker T. Washington High School for the Performing and Visual Arts, that she developed an interest in jazz. Introduced to Sarah Vaughan by her composition class teacher, Horn fell in love with Vaughan's style and worked to learn her phrasing and inflection. From there, she began listening to other instrumentalists, including John Coltrane and Miles Davis. After high school, she honed her skills studying at Manhattan's New School for Jazz and Contemporary Music. She already gained recognition as a formidable talent during her time in school and took home several Down Beat student music awards.

Graduating in 2009, Horn quickly immersed herself in the New York scene, performing alongside such luminaries as Billy Harper, Delfeayo Marsalis, Mike LeDonne, Peter Bernstein, Vincent Herring, and many more. Her latest release, Love and Liberation has quickly risen up the Jazz Charts and is currently Grammy-nominated for Best Jazz Album.