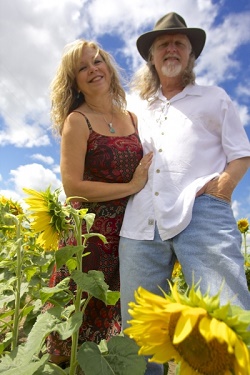 From Texas' upper east side, award-winning singer-songwriters Lynn Adler and Lindy Hearne connect with audiences coast to coast. Their music is a signature blend of original folk, jazz and blues with deep Texas roots. With 12+ recordings and decades of touring between them, their repertoire is playful, poignant and poetic – including sparky love ballads, historically based tributes, children’s music, quirky story songs, modern-day spirituals, and anthems of justice and peace.

Raised by musical families and nurtured by choirs through college, the two met in Nashville, and now pay it forward together in performances from listening-room venues, festivals and community events to churches, libraries and schools.

Lynn co-wrote the theme song for the hit PBS children’s TV series "Wishbone." Her diverse writing background brings added experience to the duo's workshops and presentations. Lindy sang in the famed Texas Boys Choir as a child, and for several years he and his band were Roy Clark’s backup group performing with Roy from Las Vegas to Hee Haw to Carnegie Hall.

This is their fourth visit to The Old Firehouse, and we are always thrilled to have them back and a great way to end our 11th season.

Get Your Tickets Early! They Always Sell Out!!

“They were utterly charming. Their well-written songs cover a wide gamut and their delivery is spot on. They should be much better known“.
– Rich Warren, Host WFMT’s Folk Stage and Midnight Special