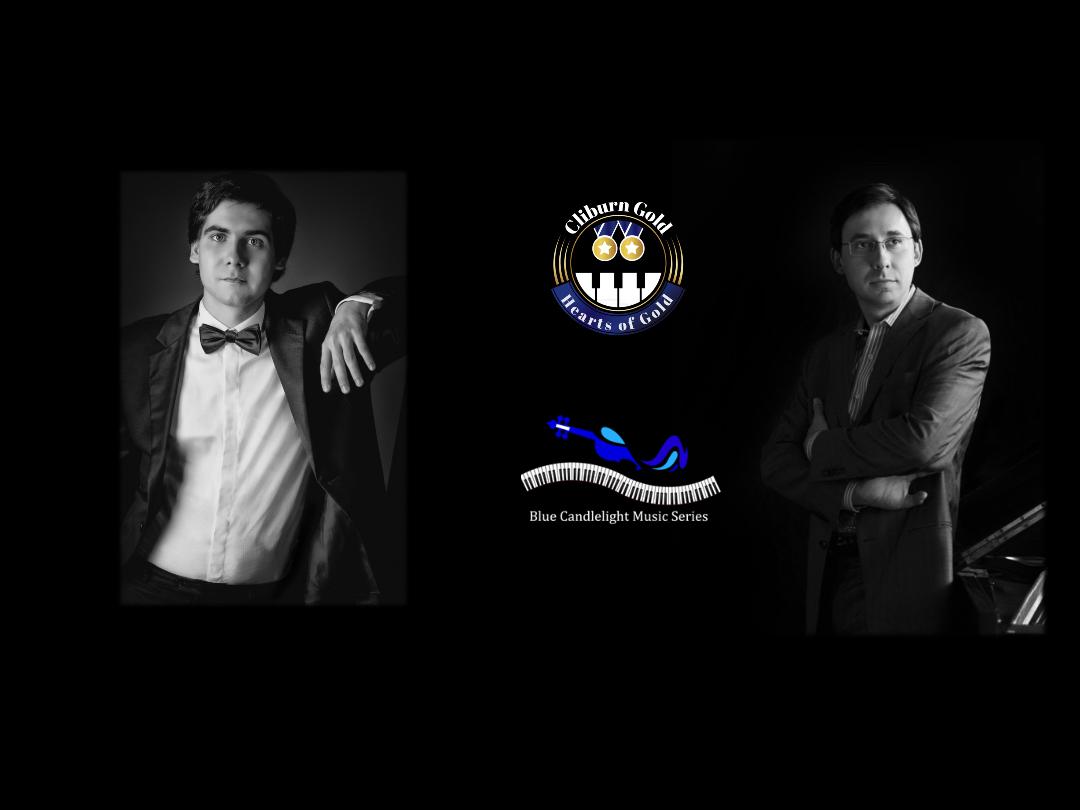 Co-founder and Artistic Director, Dr. Darejdan “Baya” Kakouberi, has announced the concert event of the new year with an unprecedented and rare opportunity to see 2013 Cliburn Gold Medalist, Vadym Kholodenko and 2005 Cliburn Gold Medalist, Alexander Kobrin performing together, on stage at the Eisemann Center in Richardson, TX. This intimate gala fundraising event will be presented one night only. Guests will enjoy a social hour with passed hors d’oeuvres followed by a seated, three-course dinner on the stage with the pianos set at center stage.

About The Blue Candlelight Music Series

Hailed as “…bringing exquisitely interpreted chamber music to the community…”

Currently celebrating its 18th Season, The Blue Candlelight Music Series, a local 501(c)(3) non-profit organization has presented more than 100 salon setting performances throughout the Dallas area. Alumni include both local and international artists who have garnered top awards around the globe and teach at renowned conservatories. Special education and community outreach efforts include benefit concerts for seniors, the innovative Young Starlights pre-concert programming and master class opportunities for area students to learn from world class performers and instructors.

“With Kholodenko, the instrument, and the [Tchaikovsky Concerto No. 1], showed refreshing vitality, showcasing a thoughtful and enterprising talent. The pianist made no gesture toward emulating Cliburn. He found absorbing melodic shadings, glittering passage work, and a sense of sound that erased any fears about the stereotypes of the competition winner.”

“He surrendered neither the smoothness nor the dynamic fluidity that the modern piano allows, and he gave his sense of fantasy free rein, and creating an almost confessional spirit."

Called the “Van Cliburn of today” by the BBC, pianist Alexander Kobrin has placed himself at the forefront of today's performing musicians. His prize winning performances have been praised for their brilliant technique, musicality, and emotional engagement with the audience.

About Richard and Enika Schulze

Richard grew up in a rural area near Buffalo, NY, the son of a German emigrant and an American mother who was the oldest of 13 children. He earned an engineering degree from Princeton University where he developed an interest in classical music, served afloat in the Navy, and earned an MBA from Northwestern University.  Working for US Steel and Mobil Chemical, he developed new products such as cans for soft drinks (1959) and plastic bags on a roll – ubiquitous around supermarket produce departments (1965).

Unemployed in 1974 he launched a one-man firm – Trinity Consultants - that became the nation’s leading air quality consulting and compliance firm.  When he sold controlling interest in 2007, it employed 270 staff in 23 offices serving industry.  He published 30 technical papers, delivered hundreds of lectures, and co-authored a 400-page academic textbook. The company now employs about 800 staff in over 50 offices.  He invested some of the proceeds in a family foundation that makes grants to cultural and educational organizations.  Richard serves on various boards including the Dallas Symphony Foundation, the Dallas Opera Foundation and the Executive Advisory Board of the Lyle School of Engineering at Southern Methodist University.

Enika was born in the Netherlands and emigrated to the United States as a teenager. She received her college and MBA education in the United States. After serving several years in the Federal Courts, she started a career in the legal publishing field. Enika founded a national paralegal magazine company. She also developed a textbook publishing company, built it to 30 different titles before she sold it to Prentice Hall, now called Pearson Education.

Lately she has focused her attention on nonprofits. She and her husband Richard founded the Richard and Enika Schulze Foundation, through which they have contributed financially to several organizations. They underwrote a challenge grant that enabled funds for construction of staff offices in the Winspear Opera House. They funded the launching of the Institute for Woman Conductors. In addition, they have underwritten and funded many other projects, such as cultural, academic research and educational institutions. They host monthly chamber music concerts in their home and love being surrounded by classical music.

Enika met Richard in Aspen on a ski trip in 1981. In their spare time, Enika and her husband Richard enjoy traveling to Europe and spending time in their condo in Snowmass, Colorado.