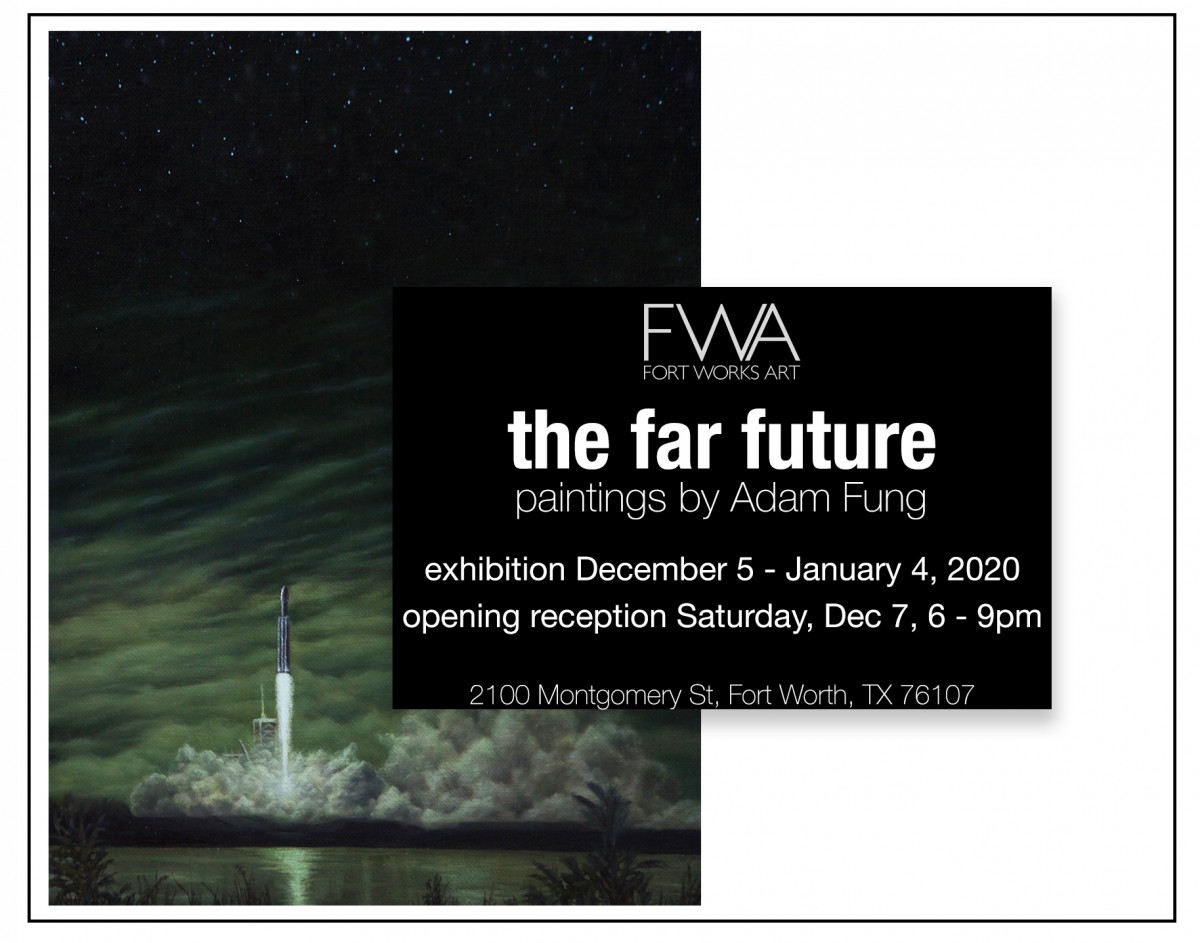 The Far Future by Adam Fung

Fort Works Art is excited to present The Far Future, a solo exhibition by Adam Fung, Associate Professor of Art at Texas Christian University and a new addition to the Fort Works Art roster of contemporary Fort Worth artists. The exhibition opens with a reception on December 7th, 2019 from 6 to 9:00pm and will be on display until January 4th, 2020. The Far Future showcases 30 oil-on-linen paintings from Fung's 'Arctic' series about his expedition to the Arctic Circle, as well as 'XnatureX', a new body of work documenting the 2018 Space X launch of the most powerful rocket in history and the dichotomy of wonder and trepidation that follows such a monumental point in human history.

Using masterful attention to surfaces with classic paint application and linen textures, Adam Fung’s paintings record modern glimpses of the Earth’s shifting atmosphere and the effects of climate change. These landscapes no longer exist as depicted, having shifted in the duration a year of winter’s snow and summers melt. The larger question at hand is- in what form will these places exist, if at all, in the coming years, decades, or millenniums? Fung’s imagery shifts from the Arctic sea and landscape, employing a monochromatic palette that speaks to the light and disorientation of the Arctic summer’s endless day, to the enormous skies of West Texas. Each image is rendered directly from photographs taken by Fung during his residency in the high Arctic and travels west to New Mexico.

In describing this powerful exhibition of paintings, Adam Fung states “In addition to the paintings of the Arctic, I have created a new body of work depicting our attempts to depart our planet. I was struck by the February 2018 Space X launch of the most powerful rocket in history, the Falcon Heavy. Along with the promise of large, Mars-bound payloads this launch deposited more pollution into the atmosphere. How do we catalog these new advancements? With wonder - as two of the three rocket’s boosters simultaneously returned to land, upright on their respective landing pads? With trepidation- as the sight of the power to take us to new planets may suggest we need a backup plan to earth? These new paintings are a meditation a significant moment in human history while also a study in muted color, surface, and the power of images."
Fung works primarily as a Painter and has a dynamic range of research interests that touch upon issues such as climate change, landscape, patterns and the make up of the universe. Fung’s work often arises from direct experience and primary sources. Recent examples of this practice include the 2016 Arctic Circle Artist Residency and Expedition around the archipelago of Svalbard and a road trip around west Texas and New Mexico that allowed the artist to visit sites of interest including Observatories, Dark Sky Parks, Marfa, and Spaceport America.